What's Up with Ravens' Brendon Ayanbadejo?

Share All sharing options for: What's Up with Ravens' Brendon Ayanbadejo?

Although it was a few weeks ago, after the Baltimore Ravens had just finished their practice at M&T Bank Stadium, I had the opportunity to approach injured linebacker and Special Teams ace Brendon Ayanbadejo in the team's locker room. Brendon has not practiced this summer and while he is built like Adonis, he still is not certain when his broken leg from last season will be healed enough to allow him to get back on the field and hit somebody.

Beatdown: "Brendon, you got a minute"

Beatdown: "Thanks. How's the rehab going?"

Beatdown: "How do you keep in shape during this time You seem like you're in pretty decent shape?"

BA: "I can still run. I still run every day. I still lift every day. So, I'm just not ready to go hit in pads, but I can pretty much do everything else." 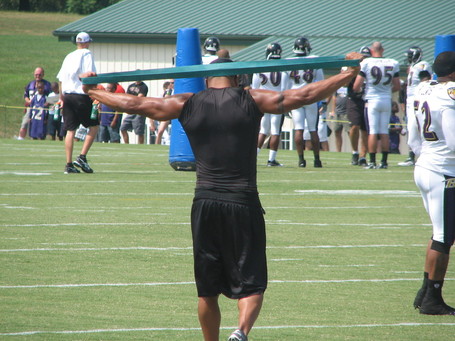 Beatdown: "Driving you crazy not to get out there?"

BA: "Yeah it is, but it's better, rather be safe than sorry. So when the time is right, the trainers feel like I can go, and I'll be able to go multiple days in a row, then they'll allow me to do that."

Beatdown: "You got a timetable out there"

BA: "No, there's not a timetable, but obviously I want to be ready to play when everybody else is playing, but you know, just got to be smart about it."

Beatdown: "I see you observing a lot of the Special Teams' drills. What are the rookies who have been contributing that you see, anybody stand out to you?"

BA: " I think most importantly, the veterans establish a high bar that everybody has to meet and the rookies have been doing a good job of meeting that bar that the veterans set and Coach Rosburg has set. So it's not that anybody in particular sticks out. It's everyone's on the same page."