As has been the practice since the full squad reported a week ago, the Baltimore Ravenstake it easier in the afternoon compared to the up-tempo pace of the morning sessions. This afternoon was Special Teams' practice before the team heads downtown for tomorrow's practice at M&T Bank Stadium. That practice, beginning at noon, is open and free for any fans who show up at the stadium. Of course, Baltimore Beatdown will be there up in the press box taking in all the action and even hosting an 'Open Thread' here on The Beatdown. 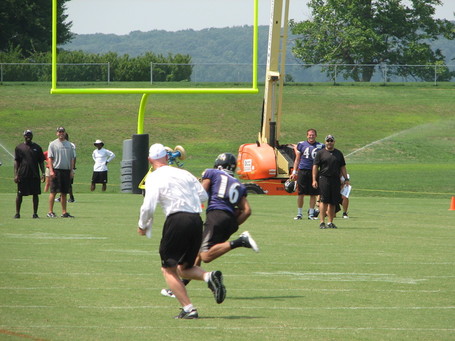 This afternoon was highlighted by watching who was back taking turns returning kickoffs. The group back there, in no apparent order, included Jalen Parmele, Prince Miller, David Reed, Curtis Steele, Tom Zbikowski and even veteran Donte Stallworth. Special Teams Coach Jerry Rosberg was barking out orders, directions and signals for the different return strategies on both sides of the ball, kickoff return as well as coverage squads.

In front of the returners blocking for them were rookie defensive tackles Terrence Cody and Arthur Jones. Can you imagine flying downfield on kickoff coverage and looking up to see those big guys in front of you?