As you can see from the photo above, the Baltimore Ravens leave it all out on the field - literally! Matt Birk is back practicing, but still taking it easy with Chris Chester getting most of the reps in drills. Marc Bulger is practicing after jamming his fingers yesterday, with the last two little fingers taped together, although I notice he is taking snaps in the shotgun formation but none directly under center. 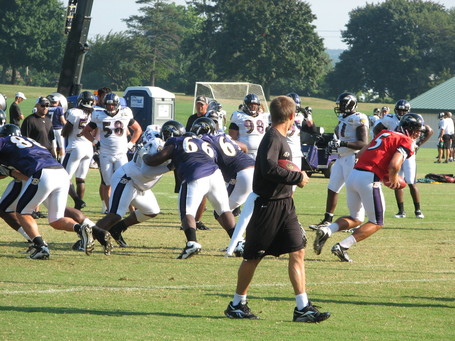 The fast pace of the rushing drills is noticeable with hard hitting between the offensive and defensive lines. Plays are being run one after the other from the adjacent hashmarks as quickly in succession as I've seen in camp, no more than 10 seconds apart. 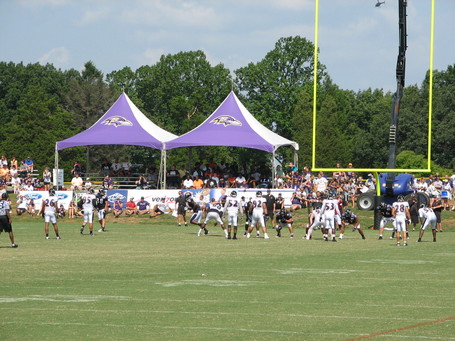 In 11-on-11 drills, Jarret Johnson greets Ray Rice in the backfield, getting cheers from the fans and pats on his helmet from his defensve teammates. Joe Flacco hits Anquan Boldin on a sideline pattern near the goalline, then Clayton on the opposite side who turns and jukes CB Travis Fisher for a short TD. Finally, Flacco ends the sequence with a TD run himself into the end zone. On the next series, under a  full out blitz, Flacco throws it up down the left sideline and Derrick Mason steals it from Fabian Washington, then turns and finishes off the TD run, leaving Fabian behind on the ground..


Once again, Flacco throws it up for Mason and Washington runs into him, never looking back for the ball as it hits off his back, falling incomplete. Mason runs up to the official giving him the "business" for not throwing the penalty flag, then laughing and playfully trying to grab the flag from the ref's belt. 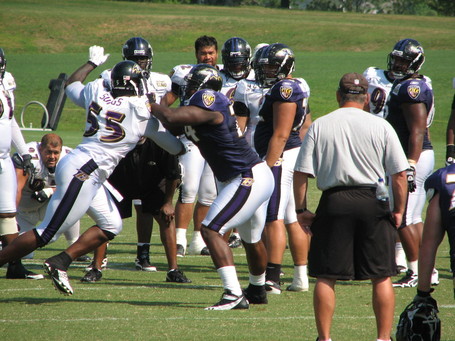 Over on the far field, the offensive line is taking on the defense's pass rushers and LT Michael Oher goes at it with OLB Terrell Suggs in what appears to be an even battle. 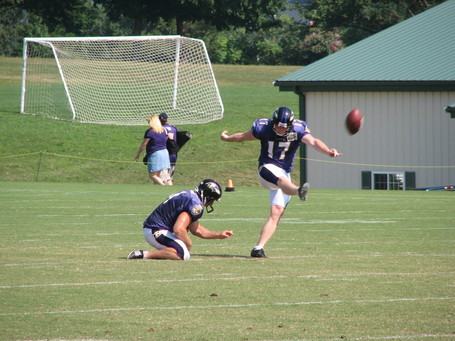 Placekicker Shayne Graham handled the field goal kicking by himself this morning, although the wind actually handled him more than the other way around. Graham hit from 35 and 44 yards, but missed from 48, 51 and 64 yards. To his defense, the first four attempts were into the swirling wind and the last one was with the wind although the much longer distance.