NFL Commissioner Roger Goodell paid a visit to the Baltimore Ravens' Training Camp as part of his tour of a bunch of NFL teams this week, along with John Madden and the 'Madden Cruiser.' Goodell spoke with the media and then was holding a Fan Forum before heading off to DC to watch the Redskins' practice this afternoon. 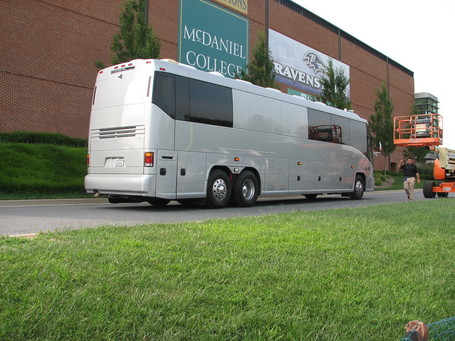 Goodell stood on the sidelines talking with the Ravens' Director of Security and a member of the team's Front Office while Madden conferred with Ravens GM Ozzie Newsome.

"Madden sure dressed for the occasion," I remarked to no one in particular. 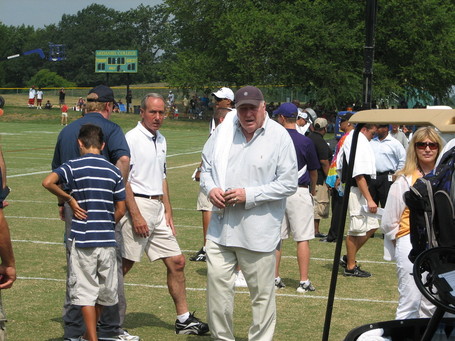 In the throng of media and cameras, Goodell took questions from the media ranging from the Collective Bargaining Agreement to his younger days as a Baltimore Colts' fan. I managed to get my question in towards the end of the press conference. Once the press conference broke up, I was able to repeat the question to Ravens' Head Coach John Harbaugh to answer.

Click on the 'Jump' to see my question and both Goodell's and Harbaugh's responses. 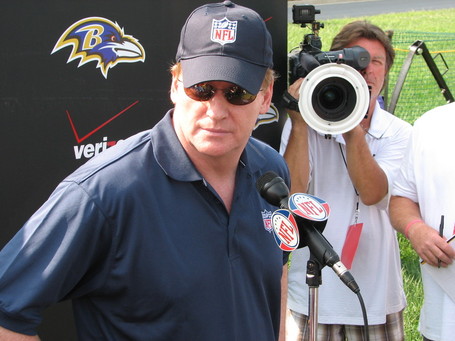 Beatdown: "The Hall of Fame Induction Ceremonies are this weekend. Is there anything the league can do to right a terrible wrong and get Art Modell into the Hall?"

Goodell: "I just spoke to Art the other day and I was speaking with Dick (Cass, Ravens' Team President). He's made a great contribution to the league. The Commisioner doesn't have that authority over it to do anything. There are a lot of great people who belong in the Hall of Fame."

Beatdown: "So another year is coming up this Sunday with the Hall of Fame Induction Ceremonies. I mentioned this to you last year and once again, no Art Modell.You want to vent?"

Harbaugh: "Yeah, travesty. It's an absoluute travesty that Art Modell's not in the Hall of Fame. It should happen sooner rather than later and it's just a shame that the people who are against Art Modell don't look at the real history of the league, don't understand what he's meant to all of us in the National Football League, and to the fans. I mean nobody's been more important to the fans than Art Modell."

Beatdown: "I asked Roger if there's anything the league to do to help out and he said, unfortunately, they have no say."

Harbaugh: "I didn't know that"

Beatdown: "Every time I see him and I saw Art yesterday, it brings it right back to me. Maybe he'll get invited one day, but it would be nice to do it while he can appreciate it."

Harbaugh: "Absolutely. Great question and good to keep this out there!"