As I enter the fields, I immediately notice the up-tempo of the morning's practice. I also notice the team's PR Department is all dressed in collared shirts, quite possibly all linked to the impending visit of the NFL Commissioner Roger Goodell. More to follow in another story on the Commish's visit who is traveling around the NFL Training Camps with the king of all video games, John Madden. 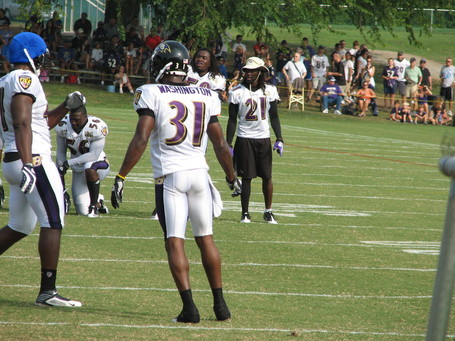 WR Derrick Mason is on the sidelines but his injury yesterday doesn't look serious enough to keep him out of action too long. CB Fabian Washington is practicing with the first team and fellow CB Lardarius Webb is on the sidelines jumping up and down on his surgically prepared leg. 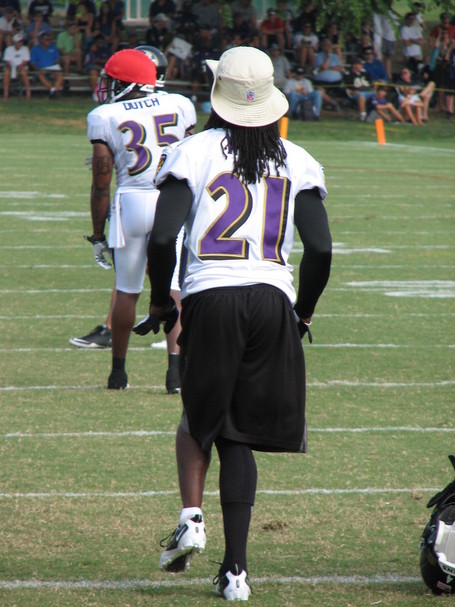 There is a murmur in the media as the 'Madden Mobile' pulls up with both Roger Goodell and John Madden.

The linebackers are hitting the practice sled, including a leaner and seemingly more focused Terrell Suggs. 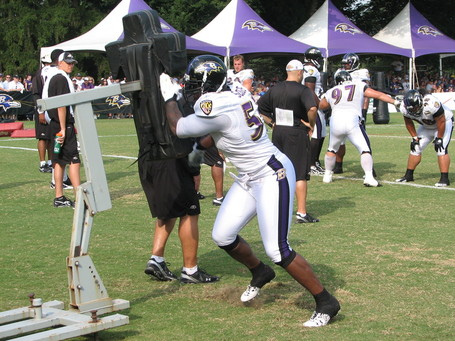 Back out on the field, the Ravens come out in 11-on-11 drills with three WR's slit to one side. QB Joe Flacco throws and Zbikowski picks Joe's throw and takes off down the field with the INT.

In 2-on-2 drills with two offensive linemen/tight ends going up against two defensive linemen/linebackers, LT Michael Oher manhandles LB Jarret Johnson, but Johnson gets right back up against TE Davon Drew, making the play.

The first-team defensive backfield is beginning to shape up, at least for the start of the pre-season and perhaps the regular season as well. CB's Chris Carr and Fabian Washington, along with safeties Dawan Landry and Tom Zbikowski team up to play with the first string front seven in drills.

The offense is practicing lateral drills, taking turns pitching the ball back and forth, even across the field until Flacco grabs it out of the air and selfishly takes it to the house.

Flacco's pass hits Todd Heap in the chest over the middle of the field but Heap is nailed on a hard hit by Ken Hamlin, dislodging the ball for an incomplete pass.

Terrence Cody stays low to impress the coaches, getting uder the ropes in d-line drills. 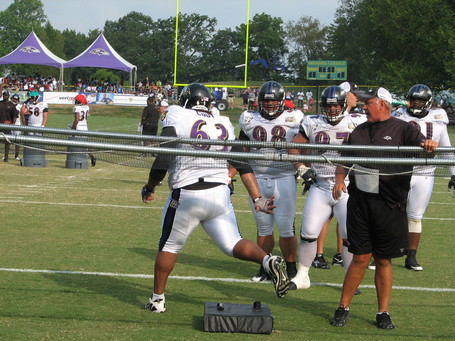 The field goal kicking competition continues but once again, no one takes a clear lead in the fight for the job. Head Coach John Harbaugh says at the podium that while he'd love to have the kicker decided before Training Camp, at least this year these guys are putting a lot more kicks through the uprights.