Thanks to Mr MaLoR for attending and putting up the story on this morning's Baltimore Ravens' Training Camp session. I wasn't able to make it but he was right there with all the news and notes, not to mention a bunch of great photos as well. I did manage to drag myself up there after the morning practice had ended but in time for the lunch at the team hotel (I've got my priorities straight, eh?). The afternoon session wasn't as spirited as the AM one was, but here's what I observed:

Jared Gaither started off practice at left tackle but moved to the right side and finished the day there whenever Michael Oher was on the field. Those two bookends give up as solid a tackle tandem as there is in the league. 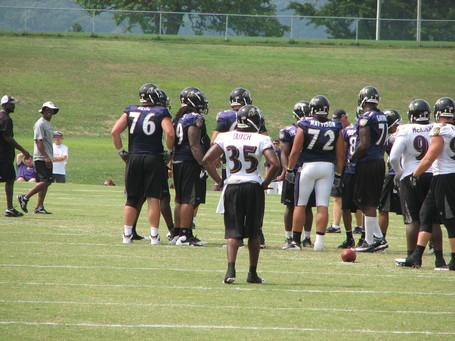 Newly acquired CB Doug Dutch (#35) was on the field but seemed a bit out of sync and obviously confused, but for good reason as this was his first day with the new team and playbook.

Two straight plays with the defense blitzing and QB Marc Bulger trying to survive by getting off the pass for the quick slant to the WR, but both times someone on the defense sticks an arm in the air and swats down the attempt. Later I saw the same thing with Troy Smith and realize how lucky we are to have a starting QB in Joe Flacco who is 6'5" tall. 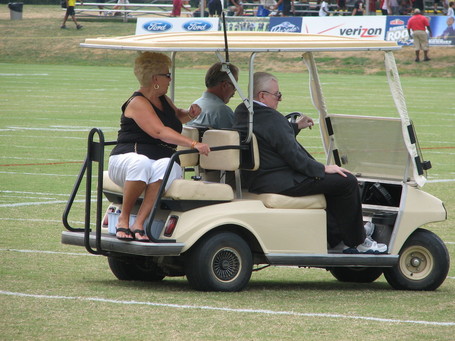 Art and Mrs. Modell make an appearance on the field in a golf cart and it's good to see the team's former owner. Of course, it regurgitates the anger in me knowing that he should be getting inducted into the Pro Football Hall of Fame, as the ceremonies are ironically being held this weekend in Canton, Ohio.

Is it me or does a defensive backfield of Cary Williams and Prince Miller at cornerbacks and Haruki Nakamura and Ken Hamlin at safeties scare anyone? To be honest, that's only the second team defensive backfield as the first team has Walt Harris and Travis Fisher at the corners and Tom Zbikowski with Dawan Landry as safeties. No wonder the Cincinnati Bengals signed Terrell Owens just to counter our corenerback moves!

On the other field, Ed Reed is testing his injured right hip by jogging the width of the football field while the rest of the team drills on the adjacent field. 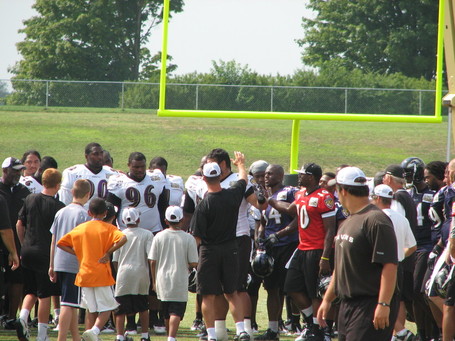 Practice ends rather quietly with Head Coach John Harbaugh gathering the players around him for a few motivational words. As the players trudge off the field, I see Joe Flacco throwing footballs from the 50 yard line through the goalposts. He makes it twice in a row. Sweet. As I leave, I see Senior Offensive Assistant Al Saunders and we get into a short conversation about how he is always hustling out there and who motivated him to be like that as well as his non-stop motor that is partially due to him running most of his life, including a few marathons in his younger days.