For the Baltimore Ravens' final practice session out at McDaniel College in Westminster, Maryland, there was a lot of slow moving plays, mainly short runs and passes as the offense moves down the field under QB Joe Flacco's leadership, and make no bones about it, this is Joe's offense and everyone on the field knows and respects it.

A couple of trick plays that will not be mentioned for fear of disclosing information that would bring the wrath of the team's PR Department down on The Beatdown.

According to that same PR Department, here are the stats for the final day of practice and the Training Camp as a whole. Thursday's final session drew around 5,000 fans in the morning and 1,900 for the afternoon session, both very impressive for a weekday practice. 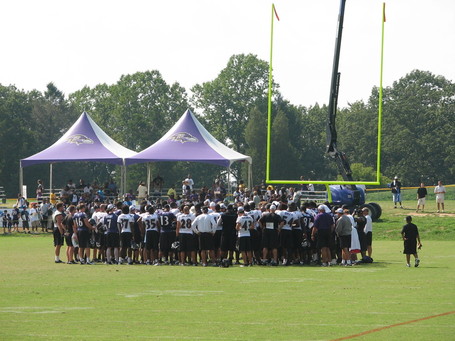 Overall, the Ravens drew 112,051 in their 2010 Training Camp, which includes the practice at M&T Bank Stadium that drew just under 18,000 fans. In comparison, the previous best summer camp the team ever had was in 2001 after the Super Bowl winning season, which drew 111,492 and that camp included two scrimmages. Last year, the team drew 96,073 fans to McDaniel College prior to the 2009 season.

The team would have a short walk -thru on Friday before heading back to Owings Mills and then over to DC to play the Washington Redskins Saturday night in their second exhibition game. Thursday night, after dinner and team meetings, the player were given a treat of a comedian, Steve Owen, who was invited to entertain the troops with his humor of jokes and stories.