With the final morning session of the Westminster-portion of the Baltimore RavensTraining Camp now over, there is just the full squad afternoon session before the team packs up and heads back to their Owings Mills Training Complex. Spirits were high and practice was lively, with the best news of all that no players were carted off the field for any reason. Surviving Training Camp from a health status is success by itself and many teams throughout the league have had devastating injuries, be it in camp or in the preseason games. The Ravens still have a month of practice and three more exhibition games, so cross your fingers that they remain healthy through the remainder of this process. 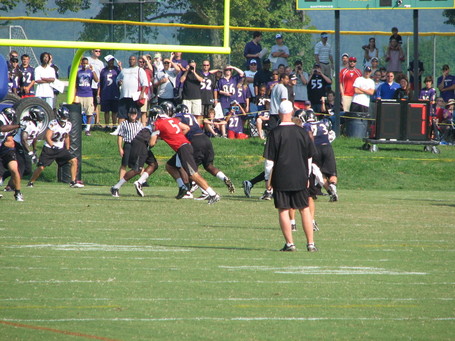 Red Zone 11-on-11 drills have been going on, as they have been a focus for all of Training Camp. Unfortunately, it continues to be necessary as Joe Flacco is picked in the end zone. I notice that CB Chris Carr is in pads and practicing, which is a good sign, although right now it appears that the 1st team corners are Fabian Washington and Travis Fisher. Flacco's soft toss long over the top is way overthrown and CB Cary Williams races underneath but it clanks off his hands to the ground, which is probably part of the reason Williams is a corner and not a wideout! 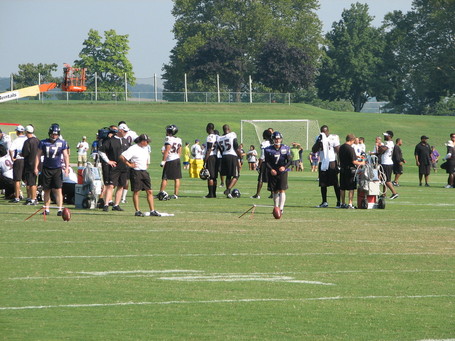 The placekicking competition continues to be too close to call and will probably end up looking more like a coin flip to decide than either clearly beating out the other one. At the end of practice, during two-minute drills, the two kickers take turns missing three straight attempts. First, Shayne Graham is wide left, then Billy Cundiff hits the left upright and finally Graham goes wide right. Not a great way to end practice.

Joe Flacco and Marc Bulger are throwing to the wide receivers, who are going one-on-one with the defensive backs and regularly beating them like a drum (or a rented mule). In succession I watch Donte Stallworth beat Travis Fisher, David Reed beat Dawan Landry, Justin Harper beat Prince Miller, Marcus Smith beat Chris Hawkins, and finally, Harper beat Miller (again). In all fairness to the defensive backs, I did witness Dawan Landry successfully bat down a pass intended for David Reed. 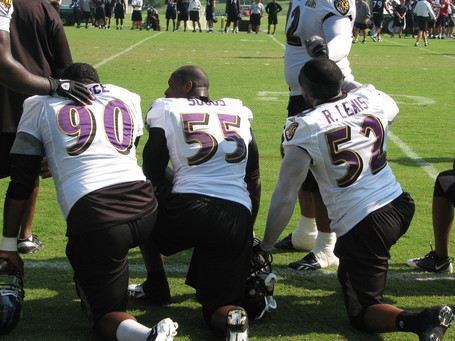 The first team offense gets back on track against the first team defense in the blitzing drill. First Flacco hits a slanting Anquan Boldinfor a reception. Then, while the running back picks up the blitz, Joe calmly flicks a deep pass to a streaking Stallworth for a TD catch behind a badly beaten Travis Fisher. With Marc Bulger under center, safety Ken Hamlin picks a poorly thrown pass over the middle. Meanwhile, Ray Lewis, Terrell Suggs and Trevor Pryce all take a breather on the sidelines, and Lewis yells to Head Coach John Harbaugh out on the field. 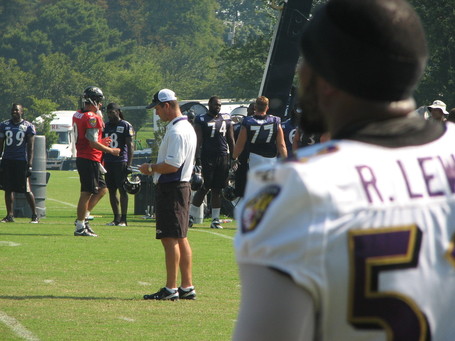 Towards the end of practice, Troy Smith gets into the action on a deep pass down the sidelines to Eron Riley,  closely guarded by Doug Dutch, but still tips the ball and then brings it down for a TD catch right in front of the fans, drawing a well deserved applause.

The Baltimore Orioles' Jeremy Guthrie, is in attendance and I refrain from the obvious comment of asking him if he was there to see a team that could catch, throw and hit. Ouch.

At the podium after practice, Harbaugh thanks both McDaniel College and the Best Western Hotel for being such great hosts for another year of Training Camp. He is impressed with the players work ethic and their willingness to work so hard out on the field and then have everyone signing  autographs for the kids afterwards, as there was approximately 4,000 fans and perhaps as many as 1,500 kids in attendance this morning.