First thing I notice when walking out onto the Baltimore Ravens' practice fields this morning is the hulking presence of the future Hall of Fame left tackle, Jonathan Ogden, who looks like he could suit up and get right back in there. Later during practice, I see him standing next to injured RT Jared Gaither watching offensive line drills. Gaither is out for the next 2-3 weeks with a back injury.

Early on in 11-on-11 drills, noteworthy comments include seeing CB Travis Fisher running with Fabian Washingtonon the 1st team defense. I had a few moments to speak with Fisher about his opportunity to increase his reps due to others injuries, and that interview will follow shortly. LB Jameel McClain is also laying next to Ray Lewis at inside linebacker, while last year's starter Danell Ellerbe runs with the second team.

For the most part, this appears to be a rather quiet, almost lackluster practice. That is, until the second fight (if you can call it a "fight") of this year's Training Camp breaks out. Hard to see who was involved, but Jameel McClain apparently head-slapped RT Oniel Cousins, who took exception to the contact, although DT Kelly Talavou was at the bottom of the pile when they unraveled it. The coaches got the players off the field and went right back to the drills. 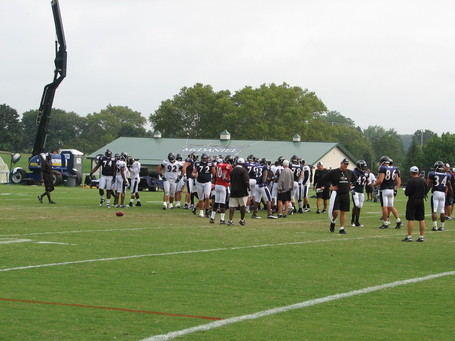 In 11-on-11 drills, Joe Flacco is picked off by a sliding safety Tom Zbikowski, who weaves his way upfield until chased down by Flacco himself. Marc Bulger throws deep to Donte Stallworth on the sideline but only after LB Jarret Johnson tapped him on the shoulder for what would have been a sack.

The placekicking competition remains neck and neck, as Billy Cundiff is impressive hitting a 58 yard FG, followed by a 52 yarder which is then matched by Shayne Graham. 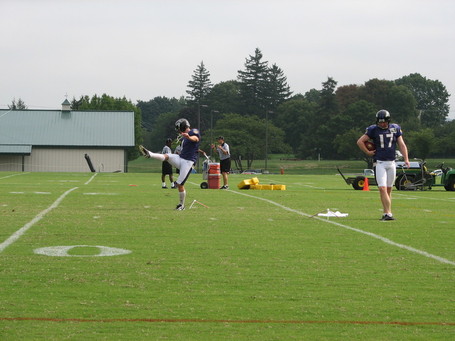 Flacco hits Anquan Boldin deep over the middle for a leaping the rolling grab in the end zone, drawing nice cheers from the fans.

In o-line vs. d-line drills, DT Haloti Ngata gets tangled up with center David Hale, both laying on the ground. Ngata gets up onto one knee,, but Hale remains face down. As Haloti gets up, he bends over in obvious pain, but thankfully walks off the field on his own power. Not so for Hale, as he is surrounded by trainers checking him out, rolling him over and finally hoisting him by four guys onto the cart to drive him off the field. 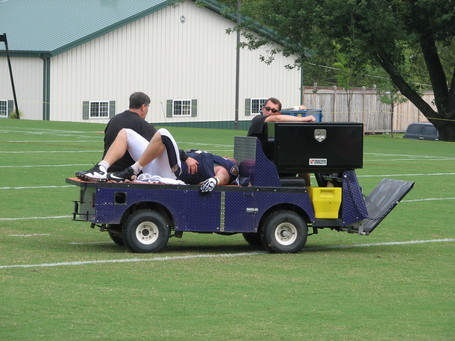 After practice ends, Flacco is observed playing catch with a couple of little kids. He may be 6'5" tall, but he still plays with the energy of the children he's tossing the little nerf ball with. 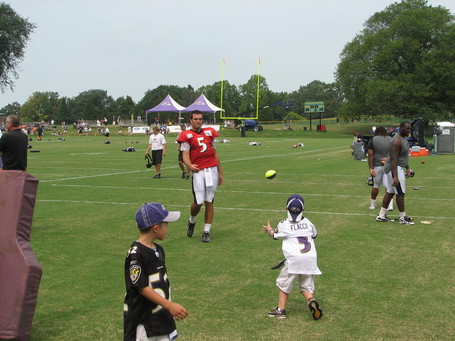