When the Baltimore Ravens scored their second touchdown in Thursday's exhibition game 17-12 win over the Carolina Panthers, QB Troy Smith made an impromptu decision to give the ball to one of his offensive linemen to dunk over the goalpost crossbar. The unfortunate recipient of that honor went to tackle Joe Reitz, who at 6'7" and 320 pounds, reportedly played basketball in his non-football past.

Reitz' flat-footed dunk attempt clanked off the crossbar, opening him to ribbing from not only from his Ravens teammates, but his friends off the field from his past as well. In addition, he made ESPN's "Not Top Five" List of weekly highlights, only beaten out for the top "honor" by a guy who moved out of the way from a foul ball at a baseball game that ended up nailing his girlfriend instead. Ouch!

I had a chance to tease him a bit and ask him about what he's heard from everyone about the gaff:

Beatdown: "Uh, working on being an extra on the remake of the movie, "White Men Can't Jump?"

Reitz: "Yeah, I got a lot of text messages, especially from my basketball teammates, all razzing me, 'Aw, we knew you couldn't dunk, we knew you couldn't get up,' and stuff like that. It was funny, it was a spur of the moment thing. I didn't think Troy was going to give me the ball. He said go dunk it. I tried to get up there, but boy, my legs just didn't cooperate."

See more of my conversation with Joe Reitz, as well as the video after the 'Jump.'

Beatdown: "Did you hear you made ESPN's 'Not Top Five' List?"

Reitz: "Oh yeah, I got razzed about that too. Every thirty minutes, 'Hey, you're on ESPN, you're on Not Top Ten, they're making fun of you on the internet.'"

Reitz: "Yeah, someone said some guy got out of the way, a ball hit his girlfriend. At least I wasn't that bad. If I did that, my wife, boy she'd kill me."

Beatdown: "Your teammates got a big kick out of it, though?"

Reitz: "Oh yeah, esecially with the o-linemen, they're razzing me during the game, yesterday, today too. So, I'm sure it will fade away in a little bit. Know it's all in good fun, a great group of guys."

Beatdown: "Not too often the offensive linemen make the highlights, so you'll take it, right?"

Reitz: "Yeah exactly, I guess. It was for a "fallie" (?) you know, but at least we got the o-line out there a little bit, albeit not for an athletic reason."

Beatdown: "Nice to hit somebody on another team for a change though, right?"

Reitz: "Yeah yeah, exactly. It was great after practicing with the same guys for two and a half weeks, you're ready to go out and hit somebody else. You know, I thought the whole o-line, we really played great as a unit."

Beatdown: "Yeah, you  guys really looked good out there. Thanks."

(Click here to view the video of Reitz' "highlight" from NFL.com) 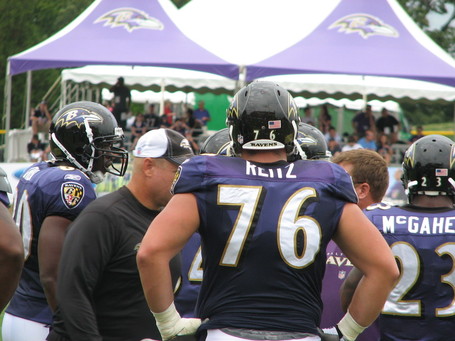