With no morning practice today and Sunday's cancelled, the Baltimore Ravens held their only practice open to the media and public since Tuesday and it was good to see the team back on the fields at McDaniel College in Westminster, Maryland. First thing I see when arriving at the fields are the QB's dropping back and throwing to the netting on command from QB coach Jim Zorn. 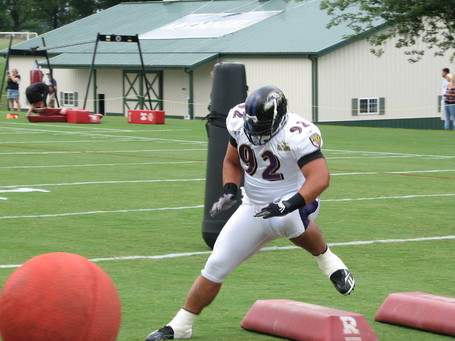 The defensive linemen are working up a sweat to the point that Haloti Ngata asks Defensive Line Coach Clarence (CB") Brooks, "Can we get a break?" To which Brooks sternly replies, "No." prompting Haloti to plead, "Need water, about to pass out." After the players finish the drill, Brooks relents.

The offensive linemen are practicing getting out front on screen passes and taking on the linebackers and defensive backs. Tackle Oniel Cousins rolls over little CB Prince Miller on a screen from Joe Flacco to Anquan Boldin. "That's just not fair," I mutter on the sidelines. Next man up, rookie offensive lineman chucks DB Cary Williams out of the way.

On 11-on-11 drills Flacco finds Derrick Mason deep over the middle, momentarily tipped by safety Tom Zbikowski, but held onto for what would have been a TD reception if D-Mase legged it out full speed. This play draws the loudest cheer of the day from what appears to b an impressive crowd for an afternoon practice. 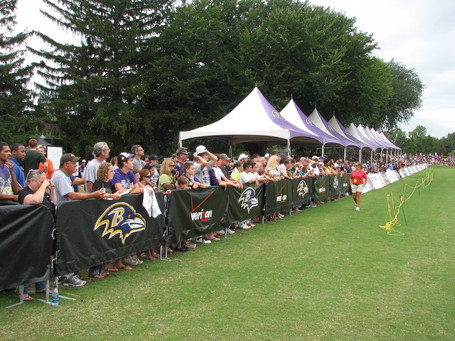 Also seen in the crowd at practice this afternoon was the oldest living member of the Baltimore Colts Marching Band, who turned 89 years old today. Happy Birthday! 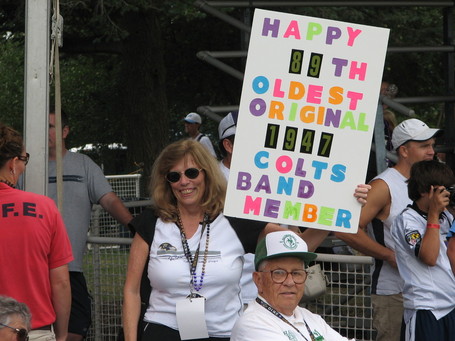 Rookie TE Dennis Pitta then makes a diving, bobbling grab from Bulger in front of safety Haruki Nakamura. Unfortunately, n the very next play, Bulger is picked off by CB Cary Williams who returns it deep down the field before being forced out of bounds.

Both placekickers are warming up their legs, with Shayne Graham kicking 30 yard FG's one after the other off the tee with no step. The day's competition seemed too close to call with Graham hitting all of his kicks and Cundiff only missing once. 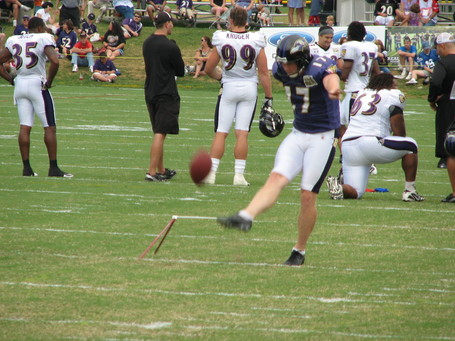 The team gathers around in a circle as the offensive linemen take the defensive linemen mano-a-mano, cheering when their side appears to win the duel. Michael Oher manhandles Jarret Johnson as some player yells, "'Bama vs. Ole Miss!" Next, Ben Grubbs and Paul Kruger battle to a draw. 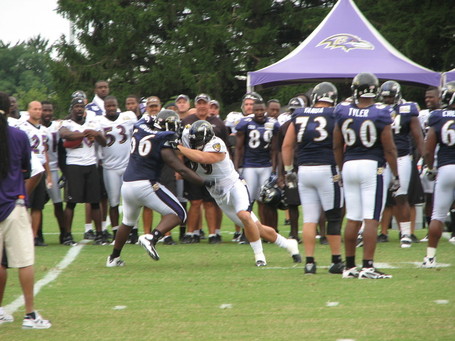 After practice ended, Head Coach John Harbaugh took questions from the media about the waiving of long snapper Matt Katula, saying that he expected Katula to catch on with another team right away. When asked how he liked the performance Thursday night from rookie TE Ed Dickson, Harbaugh's first response was what I had noticed as well, "I'd like to see his helmet stay on!"