After a scorching morning session, the Baltimore Ravens returned to the practice field, albeit for Special Teams practice under the baking sun. Special Teams' coach Jerry Rosburg is instructing the kickoff coverage team on how to attack the return game. The Ravens look like they are using the two rookie defensive linemen, Terrence Cody and Arthur Jones, as the deep players on the return wedge. Can you imagine running downfield only to see those twin plus-300 pounders running right at you? 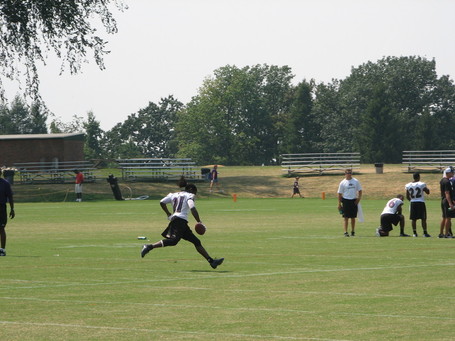 On the other feld, Lardarius Webb continues his rehab back frm his ACL surgery, backpeddling and cutting for the interception, breaking on the ball and putting the necessary pressure on the knee in order to make sure he is fully healed before he will be allowed to return to contact drills with the rest of the team. While the word is that he will miss as much as the first six games of the regular season, Webb seems like he is way ahead of schedule by the way he is moving and sweating in his efforts.

Defensive line coach Clarence (CB) Brooks is working with Paul Kruger and Lamar Divens on FG/XP blocking techniques, as those big guys may be counted on to block a key attempt during the season. Later, the same drill is being run with both Cody and Jones under Brooks' watchful eyes.

Tom Zbikowski and Mark Clayton are taking turns fielding punts although there is no indication of what will happen in the regular season, much less in Thursday's exhibition game hosting the Carolina Panthers. Same goes with the kickoff returners, as there has been a plethora of players who have taken turns returning kickoffs, including rookies David Reed, Prince Miller and Curtis Steele, as well as veterans Donte Stallworth and Jalen Parmele. 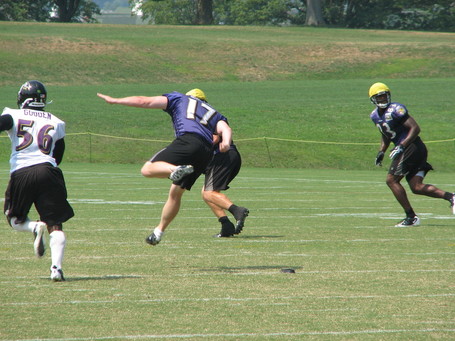 Practice ends early, probably due mostly to the heat. The team will have a walk-thru on Wednesday that is closed to the media and public. Thursday is the Ravens first preseason game on national TV and Friday the players have the day off. That means while we will certainly continue to post stories, the next time we visit Training Camp at McDaniel College in Westminster, Maryland will be Saturday morning.