At 9am, the heat is already noticeably oppressive. The players are in just shorts and shells this morning walking through their drills without even helmets on when I arrive. I notice the first team offensive line going through the motions without RT Jared Gaither, who is still being held out for precautionary purposes. In his place is Oniel Cousins, who went on to have a pretty decent morning, and I had a chance to interview him after practice (to be posted shortly). 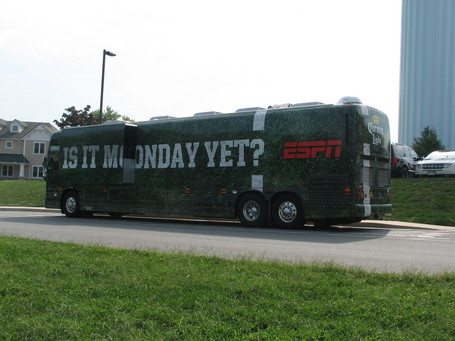 From ESPN, Ron "Jaws" Jawaorski, John "Chucky" Gruden and Suzy "Joe Namath: 'I just want to kiss you'" Kolber are there with their traveling review via their tricked-out motor coach. I asked Kolber if they would be airing anything on today's practice and she said no but I noticed both Ray's (Lewis and Rice) heading over to the motor coach after practice for additional interviews.

In 11-on-11 drills, CB Travis Fisher is running with the first team along with Fabian Washington, although Prince Miller is getting a lot of action. There's a good choice that Washington will be held out of the preseason game vs. the Carolina Panthers and along with the questionable status of Chris Carr, Fisher and Miller may end up being the starting corners Thursday night.

On a routine Joe Flacco to Anquan Boldin sideline completion, I notice Oniel Cousins handling Terrell Suggs pretty well, which is a good sign and I also asked him specifically about that matchup in practice during my interview with him. Speaking of Suggs, check out his newly clean shaven dome he is sporting under his helmet. 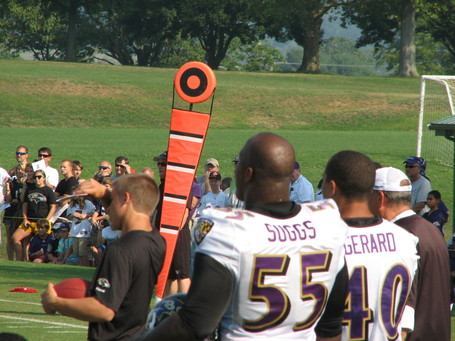 Backup QB Marc Bulger had a very solid practice, hitting a streaking Donte Stallworth down the sidelines, who caught the ball in stride d no one catches him on his way to the end zone. Later, Bulger connects with Justin Harper on another bomb, and then hits RB Matt Lawrence over a leaping Tavares Gooden as part of his nice morning.

I can't say the same thing for the placekicking competition. Although neither of Shayne Graham and Billy Cundiff seems to have a clear advantage over the other, both were equally unimpressive today, missing a significant portion of their kicks. At the podium after practice, Coach Harbaugh said the two kickers would alternate kicking in the first preseason game, although he deferred to Special Teams coach Jerry Rosburg as to who would kick first.

A few of our offensive stars stand together as the reserves get some work during morning drills. 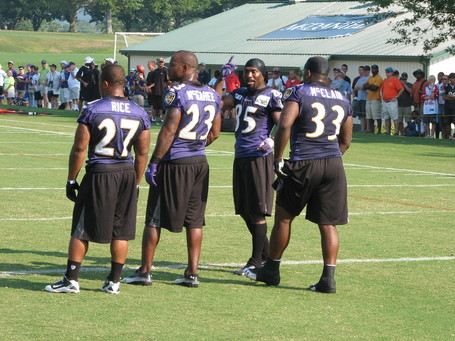 Brendon Ayanbadejo and Lardarius Webb hang out watching and wanting to get in there for some action. 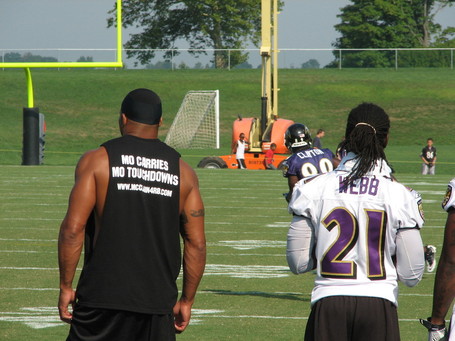 Did I mention it was hot out here?