My apologies for getting this up the next day, but even the lead writer for The Beatdown has other priorities at some times. Once again, the afternoon session of the Baltimore Ravens Training Camp started off rather slow and perhaps even listless. Unlike the morning session, Fabian Washington is now practicing, albeit in the red "no contact" jersey. For whatever reason, OL Tony Moll is not practicing. A good portion of the Ravens offense stands together off to the side as the backups get their reps in. 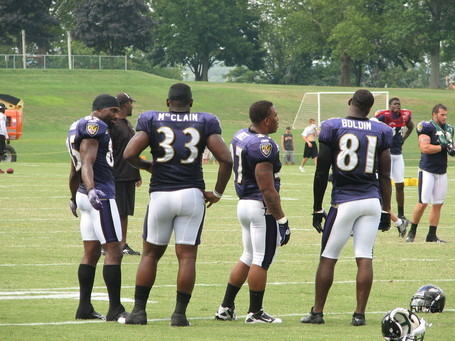 As the teams jog to the sidelines for offense vs. defense drills, all of a sudden Head Coach John Harbaugh erupts at the lack of a "sense of urgency." He brings the players back onto the field to re-run off of it the proper way.

"I blame the coaches! Get your players off the field!" he yelled. The players responded at his brief tirade right away and then throughout the rest of the session they sprinted on and off the field each time. 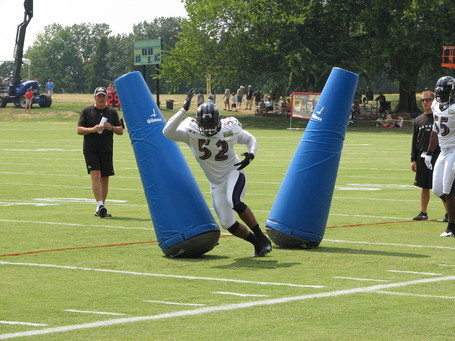 The linebackers are going through their position drills. In 11-on-11 drills, QB Troy Smith's long pass into the end zone is caught by a leaping rookie fullback, Mike McLaughlin, who is getting his first mention on Baltimore Beatdown. Both Smith and WR Mark Clayton run into the end zone to congratulate the converted linebacker from Boston College. Another Smith TD pass is grabbed by Justin Harper over a bewildered K.J. Gerard. Troy finishes a much more productive afternoon by throwing twice to Demetrius Williams, who catches both for TD's over undrafted rookie corner Prince Miller. "22's in the game," Ray Rice bellows, obviously somewhat jokingly referencing Mller's diminuitive 5'8" height disadvantage (he should talk?)

RT Jared Gaither appears on the field in shorts and a t-shirt.

With the offense pinned down on its own goal line a Bulger pass is tipped by his receiver into the waiting hands of LB Jason Phillps and then the "rugby-like scrum" ensued. The defense prevails as Phillips is bulled into the end zone by his teammates despite the efforts of the offense to keep him out. Most of the defense jumps onto the field to congratulate him.

The placekickers made all their kicks this afternoon, keeping the competition even at this point. As practice ended, Harbaugh gathers the team closely around him and before they break they chant in unison, "Hard work!"

I notice that undrafted rookie linebacker is carrying not only his shoulder pads, but Ray Lewis' and Terrell Suggs' as well. Same for rookie RB Curtis Steele, who is lugging Willis McGahee's off the field.