Share All sharing options for: Interview with Ravens' Dannell Ellerbe

After Saturday morning's practice session, I got a few minutes off to the side with Baltimore Ravens second year linebacker, Dannell Ellerbe. Undrafted out of the University of Georgia in 2009, Ellerbe was thought to be a late round draft choice, but ended up not being selected. The Ravens called him up and were lucky enough to get him into camp where he promptly impressed the coaches enough to earn a roster spot. Not starting for the majority of he season, he ended the 2009 season starting next to Ray Lewis at inside linebacker. His hitting abilities as well as tackler skills and long dreadlocks made him a fan favorite and earned him extra salary based on the league's "Performance-Based Pay Scale."

Click on the 'Jump' to read my interview with the "Eller-beast!" 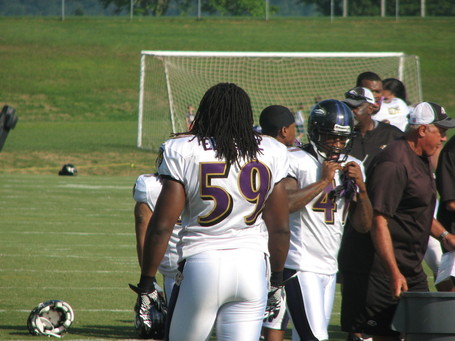 Beatdown: "I interviewed you last year, coming out of Georgia and into camp with Ray Lewis, but now here you are, a second year guy looking at some of these rookies, what's the difference in your comfort level?

Ellerbe: "I'm a little bit more comfortable because I've got experience, I started a couple of games last year. I know what it's like coming through Training Camp, I know it's going to be a grind and I know you just got to make plays and you'll be all right."

Beatdown: "What did you do in the offseason, in between OTA's and Camp?"

Ellerbe: "Mostly I was bad and they've got me on a diet. I've just been eating right and doing cardio."

Beatdown: "You got a good hit on McGahee that caused a fumble."

Beatdown: "Feels to do that?"

Ellerbe: "Yeah, I always feel good to make the play."

Beatdown: " What do you do when you see someone like Art Jones get into a little skirmish with the offense?"

Ellerbe: "I don't get too much into the little skirmishes. Somebody could get hurt, so I just stay back, unless I'm in the skirmish. Then it's something different."

Beatdown: "I have a theory out here that every guy with dreadlocks is a good player. You know, look around the NFL and see all these guys sporting dreadlocks, whether it be a Josh Cribbs, you, Lardarius Webb. Everybody who has dreadlocks is good. What do you think about that theory?"