The afternoon session of the first day of the full squad workouts was slightly slower than the morning session, and a lot of it was focused on both position drills and then 11-on-11 drills. The linebackers, defensive line and running backs all did specific position drills as seen above and below. 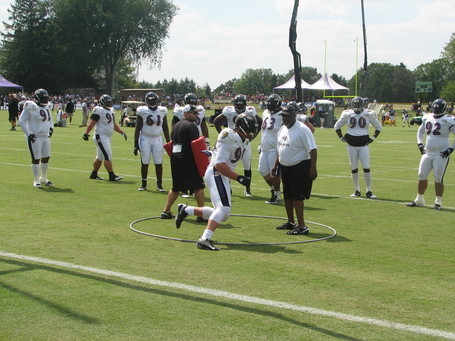 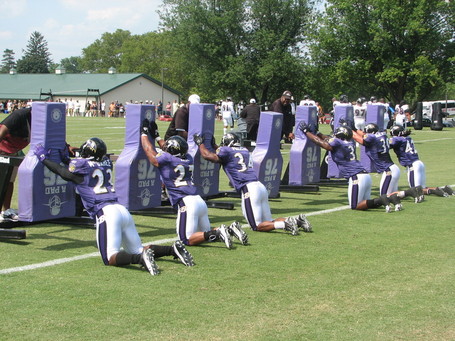 Offensive drills now have Michael Oher at left tackle and Jared Gaither on the right side. CB Fabian Washington is practicing but wearing the red "no contact" jersey. If it was up to me, I'd put both Fabian and Chris Carr away until the season started so they can be guaranteed of remaining healthy for the first game!

In 11-on-11 drills, Marc Bulger hits Demetrius Williams, who makes the catch on his knees with Fabian Washington all over him. Next, Bulger hits rookie David Reed on a TD pass. Joe Flacco rifles a bullet to rookie TE Ed Dickson and then throws short to LeRon McClain, who is met and hit hard by LB Tavares Gooden.

Lots of 7-on-7 reps for both offense and defense under many different scenerios called out by the coordinators and coaches.

Right tackle Jared Gaither is laying on the field writhing in some sort of pain. He ends up being carted off but it doesn't seem serious as while he was down on the ground, LB Ray Lewis was kneeling over him and lifting up his jersey to squirt cold water on his belly from the water bottle. Seems like it was just some cramping for all the work Gaither has gotten today for a change!