While the full squad was on the field this morning, the big news was another Baltimore Ravens cornerback went down to injury. Yesterday, in an informal practice, cornerback Domonique Foxworth tore his ACL and is now out for the season. With Lardarius Webb not ready to return and Fabian Washington on the mend, the team's so-called "weak link" just got a bit weaker. 'Next Man Up' has always been the team's mantra and never before will it be tested like this. Trying to be as optimistic as possible, Head Coach John Harbaugh stated at the podium after this morning's practice, "I can't wait to see who's going to step up." 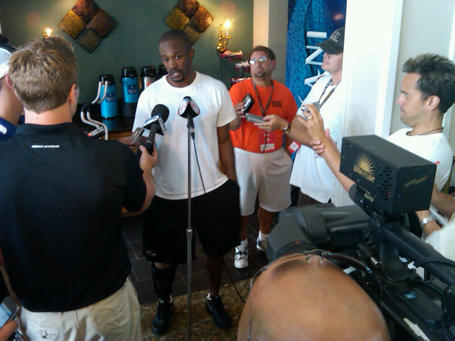 Foxworth just hobbled slowly past me in the team's hotel, on crutches and his right knee in a brace. At an impromptu press conference, Foxworth states, "I was just running, nothing special., what I've done a million times."

Out at McDaniel College in Westminster, Maryland, this morning's crowd is more like what we've been expecting. According the the team's PR Department, this morning's crowd was estimated at 11,506, the largest "non-scrimmage" crowd in Training Camp history, beating last year's opening day crowd of 11,078. As an example, Derrick Mason hauls one in on a leaping grab in the corner of the end zone, drawing cheers from the crowd and then goes over to the crowd and hands a happy little girl the ball to keep.

As has been the rule in camp so far, the team starts running offensive plays and the team's PR staff walks by politely insisting, "no photo's, please."

A quick WR screen to Anquan Boldin has him behind blockers Jared Gaither and Dennis Pitta. Speaking of Gaither, not only is he out here practicing at full strength but starts off playing left tackle while Michael Oher is on the right side. Bodies are flying all over the place as Gaither and Chris Chester taking tumbles on successive running plays. Reserve QB John Beck hits a streaking Mark Clayton cutting through the end zone for a TD, drawing cheers from the appreciative crowd.

On a quick hit, Donte Stallworth catches the ball and is quickly met by Ray Lewis and Dawan Landry, so he folds down to the  ground in an act of self-preservation!

Everyone notices that TE's Davon Drew and Ed Dickson have switched jersey numbers, as the word was that Dickson wanted to wear his college number. No word on what the "price" of the switch cost Dickson.

The field goal competition got underway this morning with no one showing any significant advantage at this point. Shayne Graham hits from 20, 36, 41 and 46 yards, while Billy Cundiff does the same form 20, 28 and 41 yards but misses from 46. In hurry up formations, both guys hit their shots.

On one play QB Marc Bulger hits Dennis Pitta for a nice TD catch over CB K.J. Gerard. However, shortly thereafter, CB Chris Carr reads Bulger's eyes and picks him off on the run for a sweet TD return. Joe Flacco, running the two-minute drill, leads the team calmly down the field with crisp, short passes, ending with another short TD pass to Boldin.

Terrell Suggs is a welcome sight on the field, looking decidedly slimmer than he did at this point last year. As practice comes to an end, Harbaugh gathers them around him for quite a long time before ending practice and striding to the podium where he went into detail about Foxworth's ACL injury. 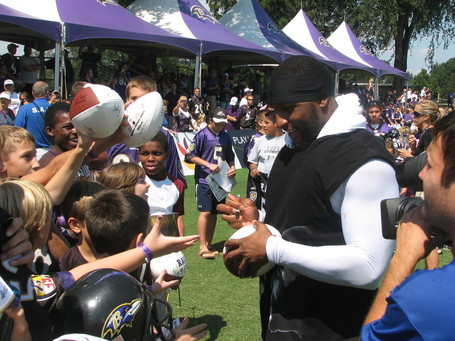 It seems the entire team takes time to spreadout and sign autographs for the kids, and even Coach Harbaugh joins in, but the biggest cheers went out for Ray Lewis as he crossed the field towards the throngs of kids screaming his name and signed for the excited youngsters.