Baltimore Ravens rookie running back Curtis Steele may be taking all the reps in practice right now, but when the veterans report to Training Camp on Friday, he realizes he will drop way down the depth chart but isn't afraid of the switch.

Steele, undrafted out of Memphis, was signed by the team and has impressed many coaches and media with his determination, not to mention his quickness and moves on the field. At 6'0" and 200 pounds, he has good hands out of the backfield, is dangerous in open space and willing to take the hit or block in pass protection. 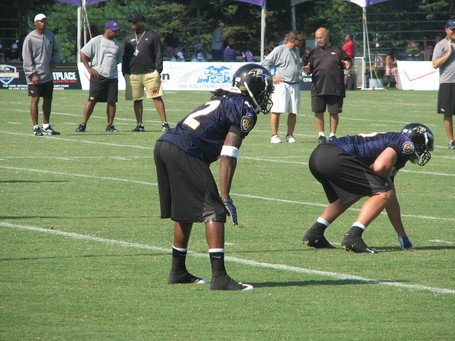 During the lull in the time between the team's final OTA in June and the start of Training Camp this week, Steele didn't take it easy at all. He said he continued to absorb the playbook and worked out to stay in shape for what he knew would be a grueling Training Camp. Playing behind his offensive line in Memphis, Steele gained 2,462 yards, including 1,239 and 15 TD's in his final 2009 season. However, he now says the offensive linemen he is playing behind on the Ravens are so much bigger, stronger, faster and he is learning to follow his coach's message of trusting them to make their blocks and find the open holes.

He also doesn't discount the benefit of the OTA's in preparing him for Training Camp and while thankful for all the reps he's now getting, he screamed in agony of pure exhaustion just prior to beginning his interview with me. I asked him if the scream was directed towards me for the interview and he assured me it was all the reps and the amount of times he had just finished signing his name for the kids in the autograph area.

Curtis is a good kid and has a ton of talent, but he is fighting a huge uphill challenge in finding a roster spot with the likes of Ray Rice, Willis McGahee, LeRon McClain, not to mention both Jalen Parmele and Matt Lawrence currently ahead of him on the depth chart. His kickoff return abilities can help him, but right now he also sits behind both Parmele and fellow rookie David Reed on the return depth chart. Good luck to Curtis from Baltimore Beatdown!