On the practice field, Defensive Line Coach Clarence (CB) Brooks had his troops hitting the blocking sled and giving instruction on the proper technique to rookies Terrence Cody and Arthur Jones, as well as Brandon McKinney. The running backs were highstepping the ropes course.

The pace was decidedly slower this afternoon as most of the veterans in camp with the rookies were given the afternoon off by Head Coach John Harbaugh. However, players such as WR Marcus Smith, Haruki Nakamura and a couple of others were out there with the kids getting their reps and drills in. Some of the veterans began to trickle in and were seen on the fringes of the field as they had to report today for team meetings this evening and tomorrow before hitting the practice field for the first full team practice Friday morning. 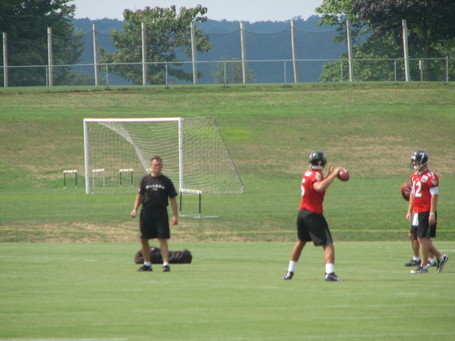 Willis McGahee, Derrick Mason, Anquan Boldin, Antwan Barnes were among those seen at the field, joining Ray Rice and Donte Stallworth, who rolled into the hotel earlier in the afternoon. Rice parked his sweet ride, a white Dodge Challenger SRT-8 with nice rims and a #27 on the air scoop right in front of the hotel's main entrance while he unloaded his car.

Lardarius Webb is standing beyond the end line of the end zone shouting encouragement to the defensive backs. 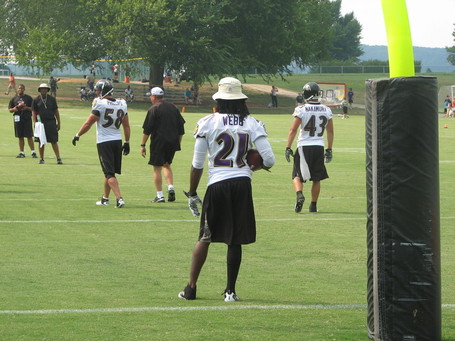 In 7-on-7 drills, QB Joe Flacco hits a leaping Marcus Smith in coverage in the back of the end zone for a real nice TD completion. On the very next play he throws low to David Reed who makes a diving TD catch in the end zone in front of safety Haruki Nakamura, who later makes an interception off of a tipped ball.

Rookie LB Albert McLellan picks off QB Troy Smith in the Red Zone and takes off down the sidelines, after both Flacco and Marc Bulger threw multiple TD passes in the same situation.

Practice ended early, after a little more than an hour and the rookies trudged off the field tired and sore, although knowing this amount of repetitions would not continue with the full team reporting and their real challenge beginning in earnest to make the squad starting Friday morning.