The final day for rookies and select veterans that the media is permitted to attend prior to the veterans taking the field on Friday morning and as reported on The Beatdown earlier, rookie NT Terrence Cody did indeed pass his physical and took part in team activities this morning. However, Walt Harris remains on the sideline and Oniel Cousins was dressed but still watching due to his sinus/throat issue. He stands off to the side with veteran center Matt Birk, dressed but calmly watching with his Ravens cap turned backwards on his head. 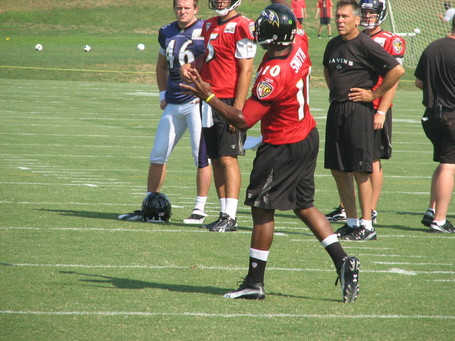 As far as the action of the day, in 7-on-7 drills, QB Joe Flacco is nearly picked off by CB K.J. Gerard on a sideline pass in the direction of WR Marcus Smith. The play has QB Troy Smith yelling encouragement from the sidelines, "That's good defense, Marcus!" After Flacco hits rookie WR David Reed in traffic, Smith again pipes up with "Great catch!" The most impressive play of the morning in my opinion is a roll out by Flacco, who then heaves a bomb that WR Mark Clayton speeds under for a long completion.

Terrence Cody stands in on the next set of 7-on-7 drills and between him, fellow rookie DT Arthur Jones, they collapse the pocket and "sack" Flacco. Even in these basically "rookie" drills, the defensive front three of Cody, Jones and Brandon McKinney line up with a half a ton of beef between the three!

As Cody waits his turn at the podium in front of the media, I say to him, "Good to see you out there," prompting his response: "Appreciate it." 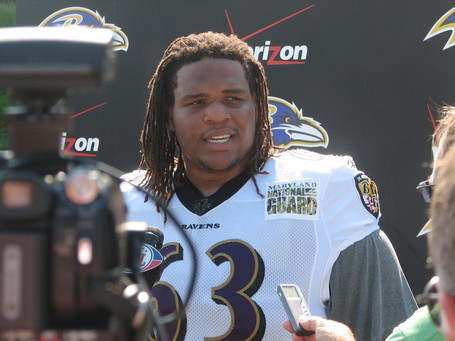 At the podium, he is asked about the mentoring relationship he is getting from DT Haloti Ngata. He smiles and says, "...funny guy, kind of nicknamed me 'Cheeseburger!"

After the formal part of the morning practice session has ended, I see cornerbacks Fabian Washington and Lardarius Webb at the far end of the field,doing hard backpeddling, cutting and then "intercepting" balls. Both are running and cutting real sharp, although obviously far enough behind to be questionable for the start of the season. 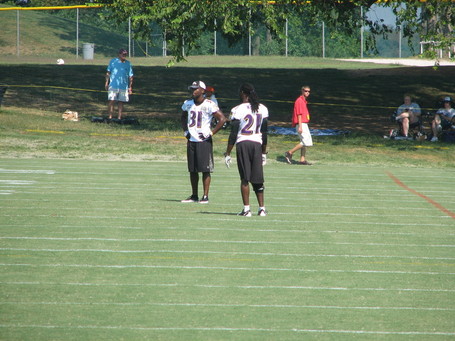 Just like yesterday afternoon, I noticed Ed Reed out there as well, not doing agility drills, but running straight lines at a slow speed, yet sweating up a storm through his gray t-shirt. 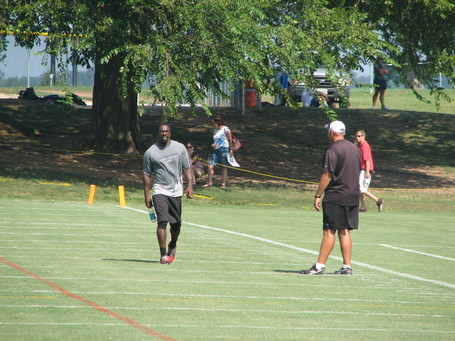 Head Coach John Harbaugh takes the podium, and in addition to his somewhat joking comment about being surprised that Cody passed his conditioning test, added that the veterans currently in camp are getting beneficial work but will be held out of the afternoon session to give the rookies more reps in the drills.