As the Baltimore Ravens rookies and select veterans returned to the practice field for the afternoon session, one thing is perfectly clear. I am so stuffed from the great lunch that the team provides to the players and yes, us media as well. Other than that, here is what I observed:

The defensive line, under the watchful eyes of D-Line coach, Clarence (CB) Brooks, is undergoing drill after drill, with rookie nose tackle Terrence Cody"persona non gratis" according to CB. Brooks is really giving it to rookie DT Arthur Jones, trying to passionately get him into the philosophy of learning the defense, not just memorizing one play at a time. Mind you, however, that Brooks is not mad with Jones, just trying to get him to follow his lead in learning the team's confusing defensive formations. 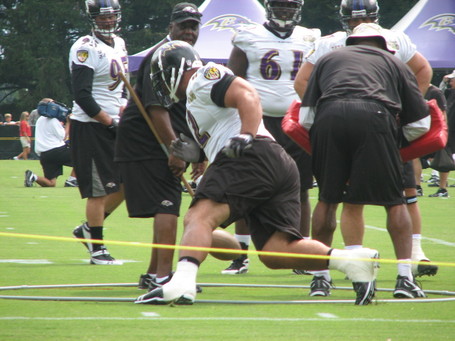 Haloti Ngata shows off his skills  (Click to see video).

Lardarius Webb, who was at the morning session in shorts and a t-shirt, now has his jersey on and is walking through plays but still not taking part. On the other hand, it's great to see the leaping catch that WR Marcus Smith makes along the end zone back line.

LB Jarret Johnson seems to be in every play, never taking snaps off and finally I see him on one knee as another player takes his place for one of the few times all day. The guy, coming off a great season in 20009, is a workout warrior and always seems to have a great attitude that the younger guys could certainly learn from.

Head Coach John Harbaugh is taking the time to stand alone with undrafted rookie cornerback Prince Miller, who reportedly is one of the many players on the team's PUP List. Perhaps he is trying to get Miller into the mindset that all the Ravens need to be to be prepared to "play like a Raven?" 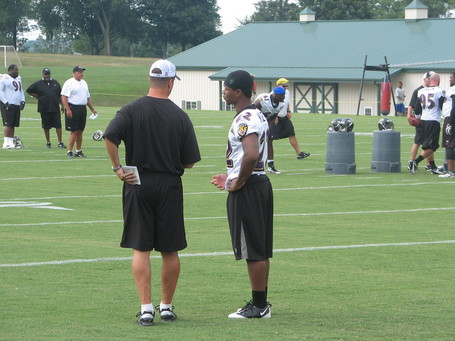 Ed Reed was reportedly on the field for a few minutes before I arrived for the afternoon session but then went back inside. However, towards the end of the session, he reappeared and went to the far side of the second field and went through a series of agility drills while being observed by Head Trainer Bill Tessendorf. 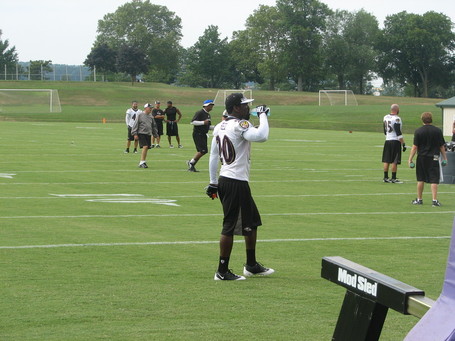