Share All sharing options for: Just a Regular "Joe"

After the Baltimore Ravens initial practice of the team's Training Camp this morning, third year QB Joe Flacco stood at the podium to field the media's questions. He laughed about their questioning of whether or not he actually gets excited and teased them that he has his own ways of getting excited. He was peppered with questions from how it feels to be in his third Training Camp to how helpful it is to have a fellow QB like Jim Zorn as his position coach. 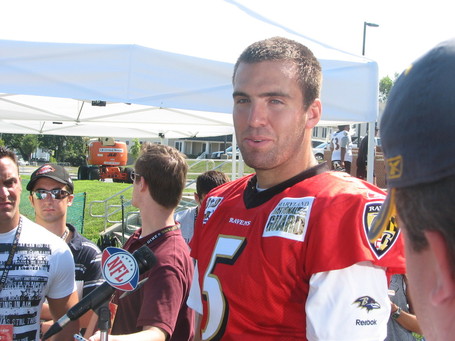 I got an early question into him and the exchange went like this:

Flacco: "Marc's been in a similar offense so it's just like the little things,..the different little words that we have for certain things. He's run the same plays just like everybody pretty much has. It's just we might call it a little bit different than he's used to. So it's just those little details. What do we call this, what do we call that? So, it's pretty easy. He's in a habit like that."