The Baltimore Ravens hit the ground running early this morning in front of an unusually sparse crowd, well below the 10,000 fans that I mentioned in an earlier story. Perhaps due to the protesting of the new autograph policy, it looked like there were around 1,000 fans at most when I stepped onto the fields at McDaniel College in Westminster, Maryland. The crowd increased as the session rolled on but nowhere near the numbers that squeezed into every available inch of space last year.

The players all seem fit and ready to hit, but this practice was almost in slow motion most of the time as coaches walked the rookies and those veterans in attendance through many of the plays. Among those veterans in camp early were Mark Clayton, Jarret Johnson, Haloti Ngata, Kelly Gregg, Davon Drew and others. Of course, all four QB's were there: Joe Flacco, Troy Smith, John Beck and the newly signed Marc Bulger. 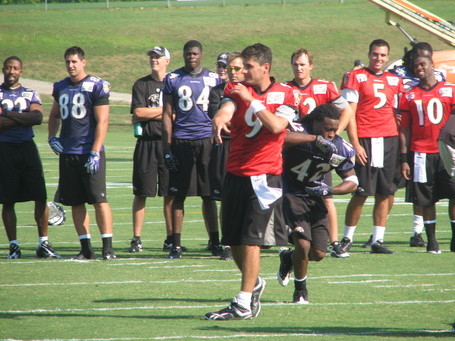 The team has marked off the area where media is allowed and it is a lot smaller and further from the field than last year. They're also restricting photography and videography during a lot of the session.

In 7-on-7 drills, I see Flacco hit TE Ed Dickson then dump another pass off to RB Curtis Steele, who handled most of the rushing load this morning until the veteran RB's come in on Friday. Haloti Ngata looks huge yet nimble for such a big guy, and towers over fellow DT Kelly Gregg in height and size.

Lardarius Webb is not practicing but stands amongst he defensive backs in shorts and a t-shirt, giving advice to the rookies. Nice to see previously injured guys such as OT Ramon Harewood and WR Marcus Smith out there practicing without what appears to be any restrictions. 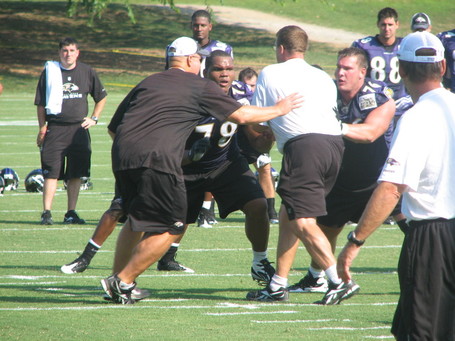 Senior Offensive Assistant Coach Al Saunders is still running around, working hard always trying to dislodge balls from receivers and runner's grasps, even long after the play has ended.

I thought I saw rookie DT Terrence Cody holding veteran LB Jarret Johnson's helmet for him. Was this being a humble respectful rookie, unless Dallas' Dez Bryant, who stated he wouldn't follow this tradition? I asked JJ after practice about it:

Cody, although dressed and signed to a new contract, was not practicing because he did not pass the team's initial Training Camp conditioning test this morning. 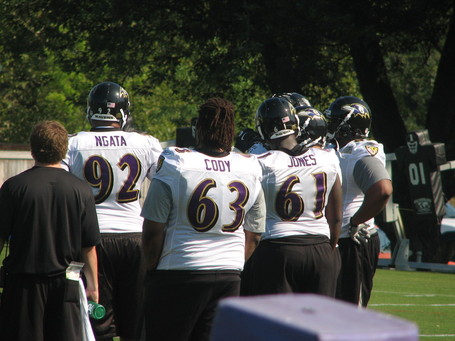 I noticed two patches on the player's jerseys and asked Kevin Byrne, the team's Senior VP of Public & Community Relations about it and was told the first one is the Maryland National Guard and the other one was to represent the biblical story of Nehemiah and the sword always by his side (?). The NFL now allows teams to sell advertising on their practice jerseys. I asked Kevin if Bob's Barbeque wanted to buy space could they? HIs response was that if they wanted to pay more than the Maryland National Guard then they could have their advertisement on the players' jerseys instead! 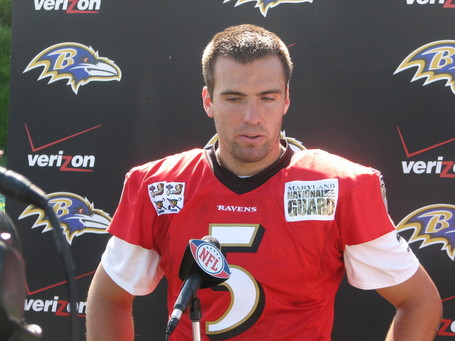