Baltimore Ravens safety Ed Reed held his charity golf tournament at Renditions Golf Course in Davidsonville, Maryland this past Friday afternoon. About 15 players joined Reed and while interviews were held with a bunch of players by local sports radio station 105.7 prior to teeing off, talk about Reed's recent comments regarding his contract status and the team's alledged refusal to send him game film was absent.

I was only able to get a few photos of the players due to the slow play and the 100 degree heat that sort of began to get to me, standing in the sun next to the first tee.

The first player I saw off the tee was 2nd year linebacker Paul Kruger, who looked even bit the ten pounds of muscle he said he put on in the off season to bulk up. Kruger, now clean shaven without his beard and curly blond locks, wound up and hit it huge, commenting afterwards, "Not bad for my first shot of the summer." 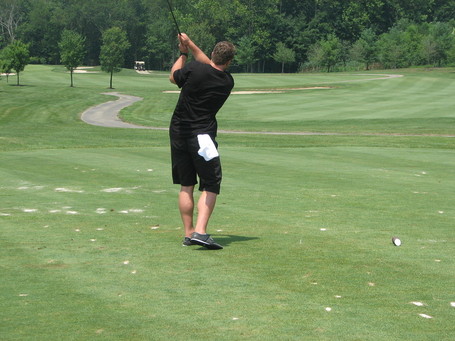 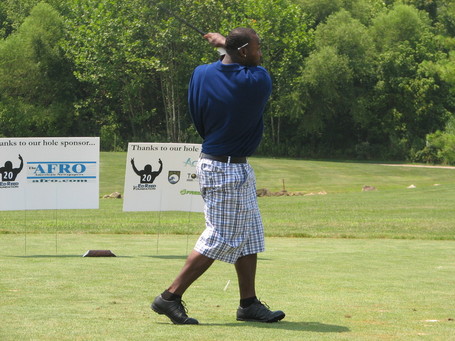 Later on I saw wide receiver Anquan Boldin looking dapper in a blue shirt with blue plaid shorts. He missed a $10 putt for a chance to win an autographed Ed Reed jersey, which I'm sure greatly disappointed him. The money was designated for charity and the putting contest was hosted by The Ocean City Green Turtle "Putt-Putt" Girls as part of the fundraiser. 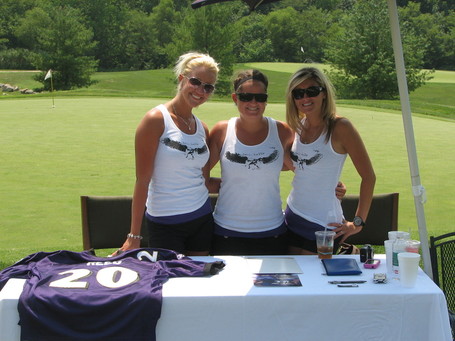 Next, on the adjoining tee, "Q" hit a nice straight shot, although not nearly as long as the burly Kruger did. Afterwards, I spoke briefly with Boldin about his dog, who we discussed after one of the Mini-Camps earlier this spring. Anquan has a rare Cane Corso, and we traded stories about our dogs and how they think they rule our lives before he set off for his next shot.

The event was for a great cause, but something tells me that the players were just there to mingle with their foursomes and have fun in the hot and humid sun. In just a few short days, the fun goes away for the most part as Training Camp two-a-days begin next week.