Since the NFL forced the Baltimore Ravens to cancel their final OTA next week, the Ravens had their full team out there today for the final OTA of the off season until Training Camp opens in late July. Of course there were a group of veterans who were either not required to attend or were recovering from injuries, but for the most part, there was a full complement of players. 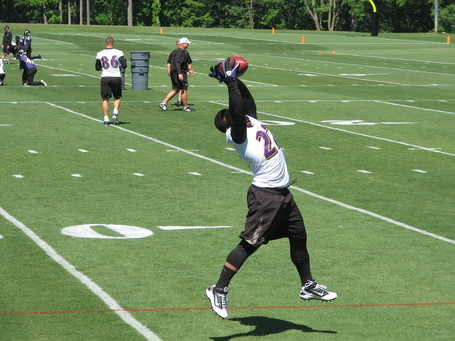 The QB's were rolling out and throwing down the sidelines.Running back Ray Rice stepped in to catch a few of the throws, including a nice leaping grab.

For the first time this season, I see WR Marcus Smith running patterns in sweats and a #11 jersey, as Anquan Boldin is obviously now wearing his former #81 jersey. As Smith walked off the field after practice, I asked him how he was doing "I was out there today, did you see me!?" he bragged.

All the drills were crisp and sharply choreagraphed, with noticeably less contact, and the practice ended exactly on time, as opposed to going significantly longer, which was one of the problems that put the team in this predicament in the first place. However, when the offensive linemen line up for drills, they are pounding each other, although holding pads to protect themselves. 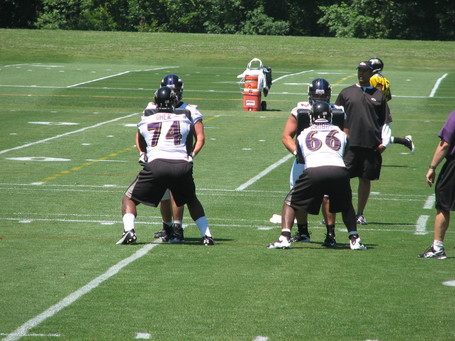 The defensive line is hitting the blocking sleds, asthe linebackers and cornerbacks drill on the far field. Nice to see the specific group of defensive linemen working as a unit. Trevor Pryce, Kelly Gregg, Haloti Ngata and rookie Terrence Cody make an imposing fearsome foursome out there under the watchful eye of Defensive Line Coach Clarence "CB" Brooks. 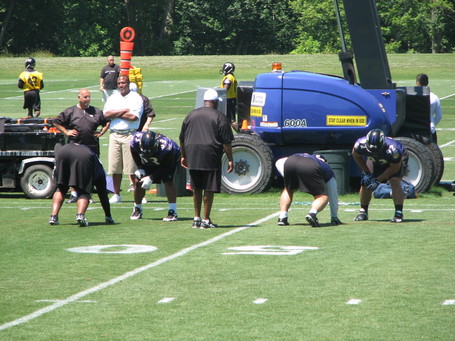 Towards the end of practice, rookie offensive lineman Ramon Harewood walks gingerly out to the field, watching the o-line drill but not taking part. Lardarius Webb is also out there, running and cutting while the team's Trainer studies how he breaks in and out of the cuts. 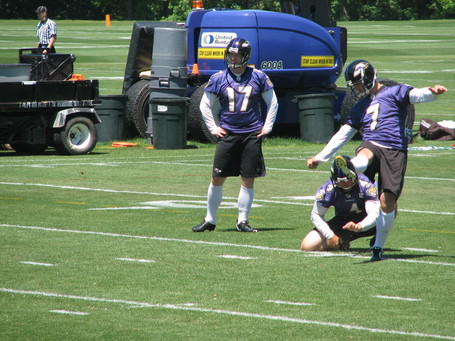 While this was not a Special Teams OTA, the two placekickers, Billy Cundiff and Shayne Graham were both practicing their field goals, with both having solid kicks go through the uprights and most people thought their competition remains virtually equal. 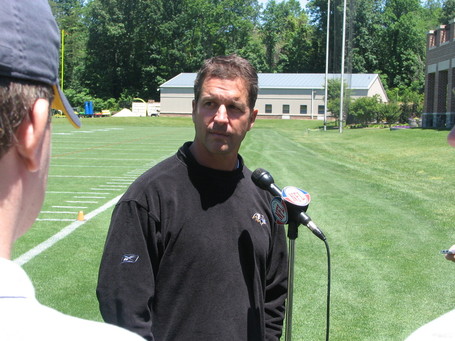 As Head Coach John Harbaugh comes to the podium to get grilled about the team's punishment for "breaking" the rules of the OTA's, he starts off by saying that "hard work is the foundation of what we do," as preliminary to the questions he knows that he's about to face.

For more of the questioning, check out BaltimoreRavens.com.

The team is practicing the rest of the week, but the media will only be permitted to attend Thursday's session, and Baltimore Beatdown will be there for the final time until Training Camp opens in late-July.