While the Baltimore Ravens Rookie Camp still has one more day to go, the press were invited to attend on Wednesday and Thursday only. The past couple of posts should have given you a decent indication of what went on and this post should summarize it all. After throwing all by himself yesterday, QB Dominic Randolph had company Thursday in the person of Bradley George, out of that football powerhouse, Texas State-San Marcos. At 6'6" and 220 pounds, George looks like a QB, but along with Randolph, is most likely here just to throw the ball during Rookie Camp until the veterans report back to practice. 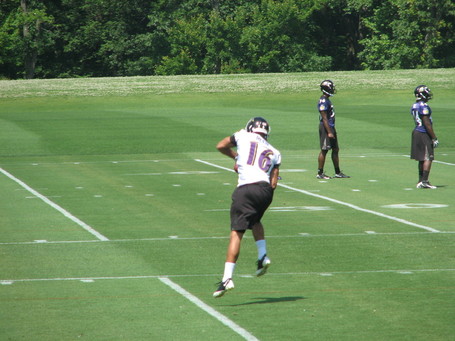 The QB's are taking turns passing to the WR's on slants and curls. Only David Reed seems to be consistently catching everything thrown his way. He's had a solid camp and combining his pass catching skills with his kick returning possibilities makes him an interesting option for making this roster, Donte' Stallworth wanders onto the field in shorts and t-shirt to watch the action and give pointers to the rookies. It's a gorgeous day out here in beautiful Owings Mills and as tough a job I have in reporting this to all of you, I am up for the challenge as someone has to do this, right? 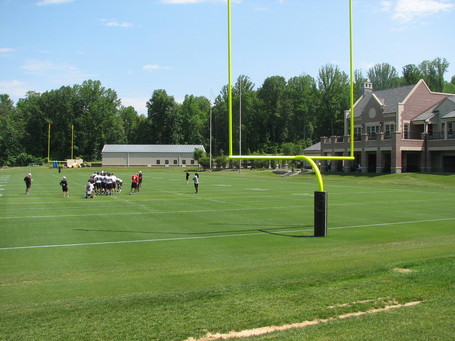 Senior Offensvie Assistant Coach Al Saunders is STILL running around, breaking the huddle with the offense and then sprinting to the sidelines and into the defensive backfield. He follows the play and then chases the receivers after the catch trying to knock the ball from their grasp all of the way back to the huddle. He should be an inspiration to these younger kids with his non-stop hustle. He sure is impressive to me. 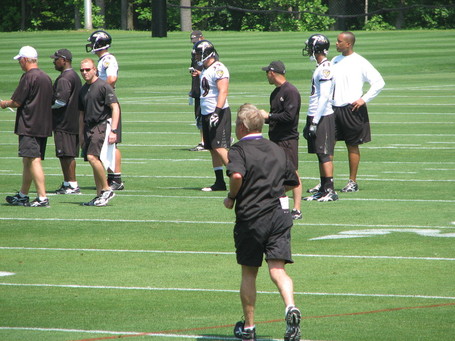 The defensive linemen stand around listening to Defensive Line Coach Clarence Brooks ("CB") coach them up, but then gladly sprint to the water tank for a quick break then back to Coach Brooks. To defend their lack of activiity, there are only three of them in camp right now and they're getting a ton of reps and drill work done. 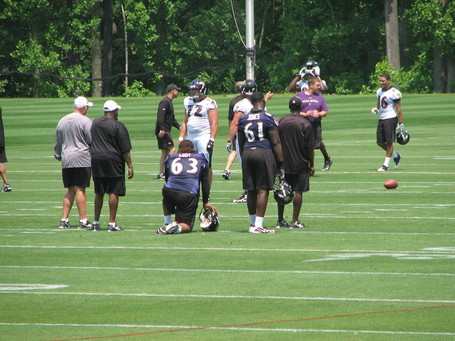 During one of the offense vs. defense drills, an unnamed assistant coach is heard yelling, "...you better start playing aggressive or I'm coming in at safety and one of you guys are getting the f--k out!" 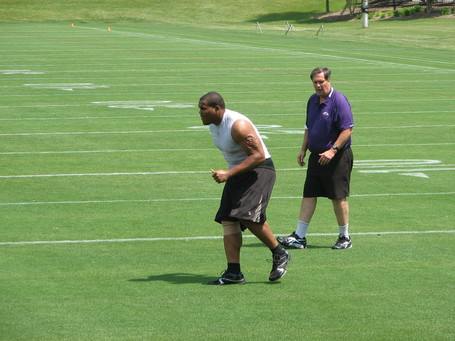 I notice that injured OT Ramon Harewood is out on the field under the watchful eye of Head Trainer Bill Tessendorf, who is working with him. Harewood, in shorts and t-shirt has an ace bandage around his right knee and is doing agility-type, shuffling drills. Later in the locker room, I see Tessendorf walking by and ask him how Ramon is doing: "We're getting there," he replies. "Got a nice sweat out of him, didn't we?"