The Baltimore Ravens signed placekicker Shayne Graham to a one year contract today, and Graham spoke to the media after Rookie Camp Practice ended. Graham has obviously been signed as competition for current Ravens kicker, Billy Cundiff, but has high expectations and is not fazed by the thought of competing for a job after being with the Bengals for seven previous year.

I asked Graham a coupke of questions along with the rest of the media:

Beatdown: "What will it feel like walking into the visiting locker room in Bangals stadium and hearing the fans booing at you?"

Towards the end of his questioning, I asked him if there were other teams that were pursuing him:

Graham: "This ended up being the best situation for me. I've always admired this organization from afar." 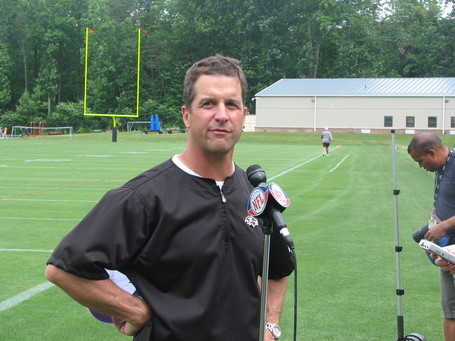 Prior to Graham meeting the media for the first time, Head Coach John Harbaugh introduced him after originally being cut from the podium agenda, as tho rookie TE's were there for questioning and the PR Dept. didn't want to prolong the post-practice session.

"Now you know how it feels,"I muttered loud enough for Harbaugh to hear, drawing a few laughs. "Yeah," he replied. "Now I know what it feels like to be cut," he said, drawing more laughter than my comment did.