The Baltimore Ravens are holdig their Rookie Mini-Camp this week and Wednesday was the first of two days the media was invited. Because this is titled a "Rookie Camp," only the drafted and undrafted rookies, along with assorted other players that spent last year on the team's Practice Squad, were in attendance. By my count, there were 23 players on the field, including new QB Dominic Randolph, who was brought in as the only passer for the camp.

Randolph, 6'3", 223 pounds, out of Holy Cross, must have an iron arm, as he threw all morning with no backup. I asked Head Coach John Harbaugh about how he was selected and how his arm was:

Beatdown: "Is there any specific reason you brought in Dominic Randolph to throw, and are you going to ice his arm down after practice?"

Harbaugh: (laughing) "He got a few reps, didn’t he? Well, we needed a quarterback. It’s a rookie camp, so we didn’t have one. And he’s a guy that our scouts felt like has a chance maybe to develop long-term in some way. He’s done a nice job. He came in, walked into the first meeting and didn’t know one thing about what we were doing, how to call a play or anything else. And he’s in there calling plays. Now, Jim [Zorn] and Cam [Cameron] have been very close by, right? But he’s done a good job." 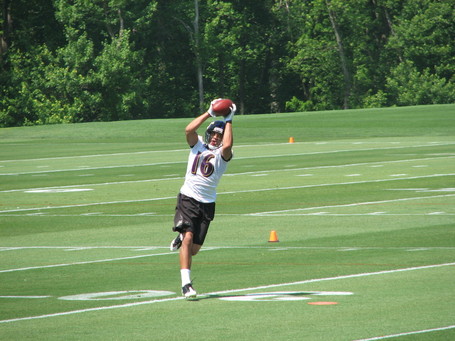 Early on in practice, Randolph was hitting the wide receivers on crossing patterns, highlighted by a nice grab by WR David Reed (Utah). At the end of the field, rookie tight ends Ed Dickson (Oregon) and Dennis Pitta (BYU) were going one-on-one in a battle of 3rd and 4th round draft picks. On another pattern, Reed turned and looked at the last second before snatching a Randolph pass off another slant. 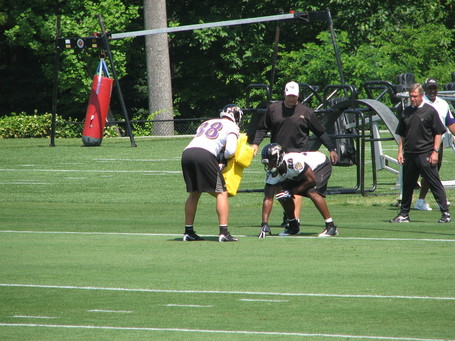 Senior Offensive Assistant Coach Al Saunders seems to be the hardest working guy out on the field. He runs down the sidelines after the huddle breaks and once a receiver catches the ball, he follows them, trying to jab the ball out of their grasp, even as they head back to the huddle.

Second round draft pick Sergio Kindle (Texas) leaps high for a pass deflection that went off his fingertips on what could have been an interception. LB Albert McClellan (Marshall) does the same thing, only holding onto it for a nice pick.

At the far end of field two, the defensive linemen are taking turns running through tackling dummies, with the sound of the smacking echoing around the field. On the other end of that field, CB Fabian Washington is running 20 yard shuttle drills shirtless, sweating as he tests his surgically-repaired knee. 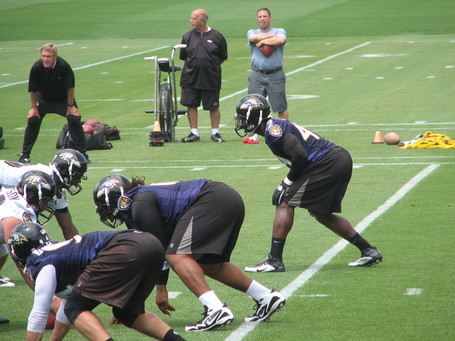 In combined offense-defense drills, DT Arthur Jones (Syracuse) rushes the passer, tossing offensive lineman (and Defensive Coordinator Greg Mattison's son) Bryan Mattison all over the place. Just like he did last week, DT Terrence Cody is eating up blockers as he shoves the offensive lineman back into the QB. Watching Cody with his hand on the ground and Kindle at OLB off Terrence's right hip, gives me a sense of security, knowing that shortly we should be seeing that set as a commonplace occurrence for years here in Baltimore. 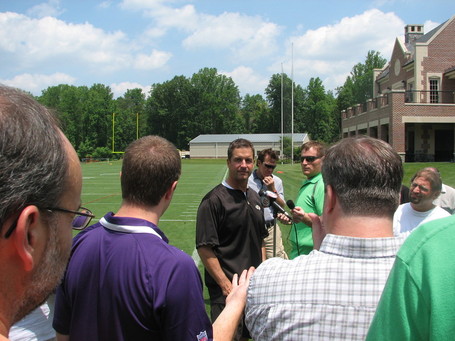 Once practice ends, Coach Harbaugh comes to the podium for questions, which included the earlier one from me on the new QB in camp. He said the progress even from yesterday to today, was fantastic, as these guys were getting lots of reps due to the limited number of players on the field. He refused to be baited into saying anything about the possibility of signing veteran kicker  and former Cincinnati Bengal, Shayne Graham, saying that was GM Ozzie Newsome's area of expertise. However, he did say it would be nice to have veteran competition in camp to push incumbent Billy Cundiff.