Although the Baltimore Ravens have one more day of the final OTA prior to Training Camp beginning in late-July, this was the final session that media was permitted to attend. The pace was quick and the players looked loose yet sharp and once it was all over, the players and coaches headed in opposite directions. Many of the players would be returning to their home states to continue to work out and prepare, while others were looking forward to relaxing. The coaches, however, were headed back to the office to keep their noses to the grindstone in turning this team into the Super Bowl contenders that almost every expert is predicting them to be. 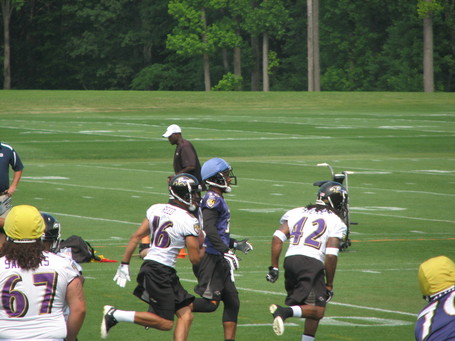 Head Coach John Harbaugh is talking off to the side with WR Anquan Boldin. David Reed is back returning kickoffs. Reed is looking as good as any player and I had  a chance to sit down and speak with him in the locker room after practice. I'll post that interview in the next day or so. 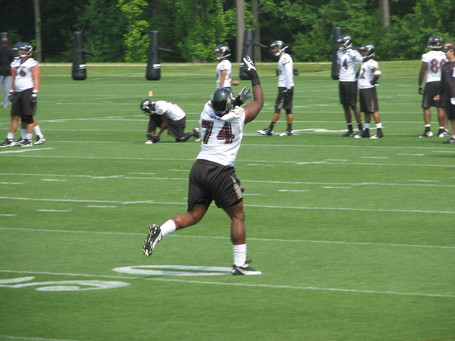 The QB's are lofting passes to almost every player in turn. Michael Oher misses a pass from Joe Flacco and is getting ragged on by his teammates, so he yells in frustration, "I get all the bad balls!" 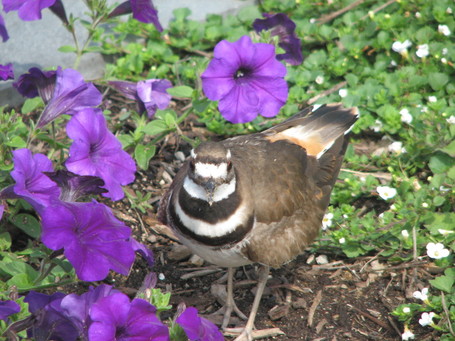 As the media spread out on the patio overlooking the field, a bird in the flowerbed in front of us starts squawking. I lean in and see it has laid two eggs, so I say something to the PR staff, who move the media away from the bird (Yea, me!).

Ray Rice and rookie Curtis Steele are the only two running backs here today, so Steele especially is benefitting from a ton of reps. I wonder where LeRon McClain is not that he has signed his tender? 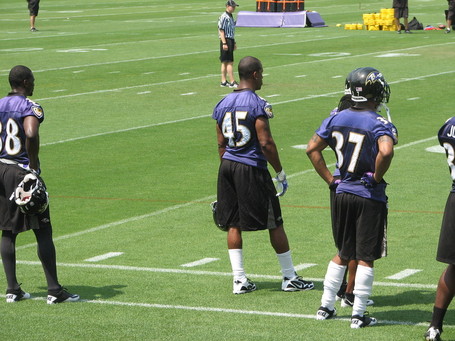 Although not listed on the roster, I notice the three defensive backs that were brought into camp for tryouts. Walt Harris (#38), Ken Lucas (#37) and Ken Hamlin (#45) are all wearing nameless jerseys, hoping to earn their name on the back. Of the three, Hamlin is the tallest, but as a safety, his chance of making the squad is probably lesser than the others.

Tavares Gooden picks off Troy Smith and heads down the sideline, then chucks the ball up high into the air as the defense hoots and hollers. Shortly after that, Dannell Ellerbe intercepts John Beck's screen pass attempt as the whooping continues. Later on, ILB Jameel McClain steals a Troy Smith pass out of the air after pressure from Antwan Barnes.  On the sidelines, I notice how Ellerbe is built stocky, like an inside linebacker, while rookie Sergio Kindle is built more for speed and athleticism. 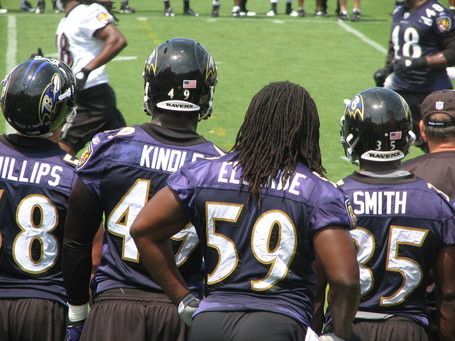 In the placekicking competition, both guys look pretty good and in the first round of kicks, while Shayne Graham is 3 for 3, Billy Cundiff goes 2 of 3.

Anquan Boldin catches a pass over the middle, followed closely by none other than Special Offensive Assistant Coach Al Saunders. 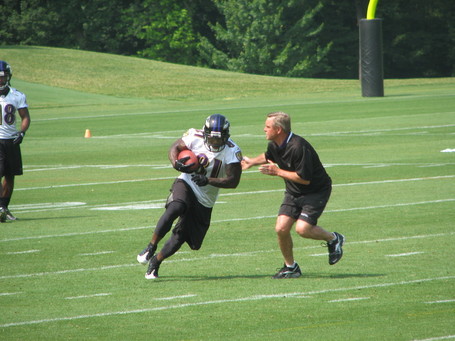 In the final FG competition of the day, even the players get into it, coming out onto the field to watch these two kickers go at it. Both hit from 47 and 51 yards and then Graham one-ups him by nailing a 54 yarder. Cundiff then wows the crowd by hitting from 60 yards and up steps Graham for the final kick of the day. He sends it long and it clanks off the upright and through the goalposts for three points, as the players cheer the two guys' great show! 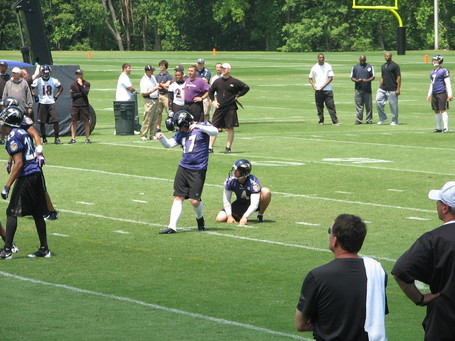