"Obviously, you can see they’re in good spirits – probably excited that it’s over, but also I think they’re excited that they had a good three days. We got better and now we’ll give them a week off. We’ll be back next Monday and we’ll start the OTAs with the passing camps."

The day was bright and sunny, but a blistering wind made it seem freezing out there, causing most of the underdressed media to shuttle back and forth into the warmth of The Castle during practice to defrost. I wondered if the team had the wind piped-in to make it feel like cold, fall-like conditions.

Click on the 'Jump' to read about what went on Sunday, with a few photos as well.

Early in the practice, QB Joe Flacco pitched the ball to RB Ray Rice, who then threw a sweet pass into the arms of Anquan Boldin. Like to see that a few times during the season! 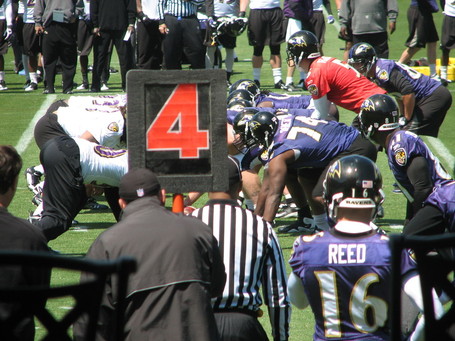 Offensive Coordinator Cam Cameron is counting backards from ten seconds to simulate the hurry-up offense. Flacco runs it without panicking, at times calmly waiting for his teammates to get set before having it snapped to him at :01 seconds.

In 11-on-11 drills, backup QB Troy Smith hits a diving Ed Dickson just shy of the end zone line. Great effort and catch by the rookie tight end, which drew cheers from the players. 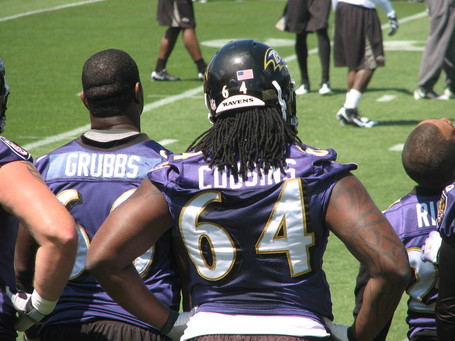 Flacco then drilled a 20 yard pass over the middle to Demetrius Williams, who had a noticeably-improved camp, as evidenced by Harbaugh's comments after practice:

"Yeah, Demetrius really did. You know, he’s had a good offseason. He’s really worked hard. He’s got some legitimate weight underneath him right now. He’s getting better. Now this is probably the first offseason he’s really been truly healthy. So, he’s made some progress."

On the very next play, however, pass protection broke down, allowing rookie DT Terrence Cody to get a "sack" on Flacco. 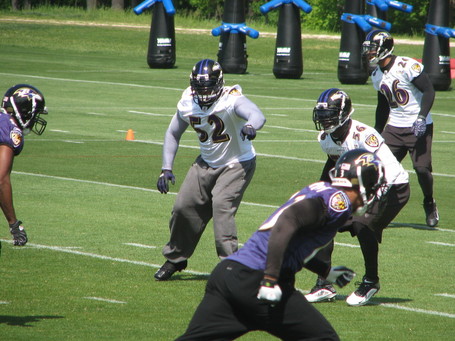 Shortly after that, Flacco hits TE Todd Heap over the middle against the blitzing defense for a TD. Heap alley-oops the ball for guard Ben Grubbs to dunk over the goalpost cross-bar, but it ends up more of an "oops" than anything else.

Towards the end of practice, the field goal team had a couple of shots, which included a Billy Cundiff 29 yarder which clanked off of the upright, although the wind was gusting pretty bad in his defense.