A while back, the Baltimore Ravens center Matt Birk announced that he was donating his brain for research into the study of brain injuries resulting from concussions in pro football, an issue that has been at the forefront of the NFL based on so many former playerrs being diagnosed with dementia as a result of the constant pounding their heads absorbed over the course of their playing careers.

While speaking with Birk yesterday in the team's locker room after the second day of the Ravens' three day Mini-Camp, I had the chance to change the topic from discussing how rookie nose tackle Terrence Cody was doing to the brain injury issue and how Birk came to his decision.

Here is what Birk explained to me how he decided to make this difficult decision: 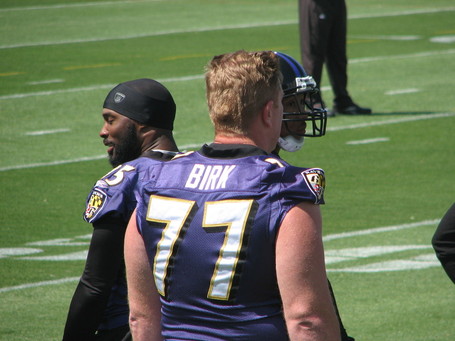 Beatdown:  "What went into that decision to pick that specific program and organization?"

Birk:  "One of the guys involved with that, I played college ball with, and he was a professional wrestler actually. His wrestling career ended because of concussions. He just kind of made his life's work and passion to learn more about it. He contacted me and I decided because of it, anything I can do to help make the game safer or future NFL'ers, especially for young people, just trying to make it as safe as possible."