Terrence Cody is a Mountain of a Man

Share All sharing options for: Terrence Cody is a Mountain of a Man

After the completion of the Baltimore Ravens second day of their three-day Mini-Camp at their Owings Mills, Maryland Practice Facility, 2nd round draft pick Terrence Cody came to the podium to take questions from the assembled media.

I was able to get a question into Cody and here is the exchange:

Beatdown:  "How important is it in going up against someone like Matt Birk, using technique as opposed to pure strength?"

Cody:  "We had a couple good battles and stuff. He’ll get me sometimes, and I’ll get him sometimes. It’s just one-on-one battling and stuff. We just duke it out.” 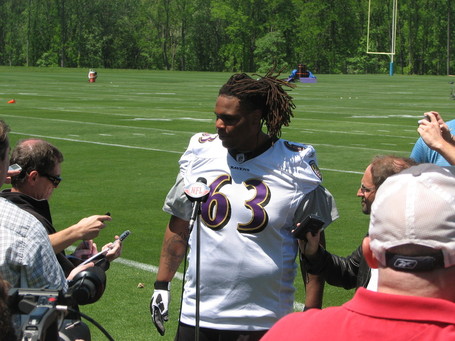 Also at the podium just before Cody, was Defensive Coordinator Greg Mattison. When asked about Cody, Mattison offered, "For a guy as big as he is, he's got a great first step."

Later in the locker room, I asked center Matt Birk whether Cody used basically just brute force or actually had technique to his game. 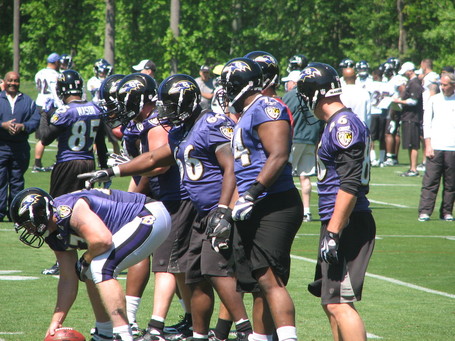 Birk:  "He's got some technique, he uses his hands well. Obviously, he's a big, strong guy. He turns his body in subtle ways. He's more than just brute strength. He's got some savvy to him."

When I mentioned to Birk that Cody said, "He beat me some times, I got him some others," Birk confirmed it.

Birk:  "Yeah, it's great when you got a guy like that to work with. You know, it makes both of you better."

Beatdown: "How much pity do you have on opposing centers who have to go up against both Cody and Ngata every game, much less Kelly Gregg?"

Birk: (laughing) "We have a pretty formidable d-line.We see those guys Monday through Saturday and it's hard for us, but other guys have to see them on Sunday, so I'll take them the other six days of the week."