The Baltimore Ravens returned to the practice field for the second day of their weekend Mini-Camp, and Baltimore Beatdown was right there to take in all the action. Sunny and warm, yet incredibly windy, the goalposts were shaking in the breeze. One of the first things I noticed was that new right tackle Jared Gaither was missing and I wondered was that due to an injury or perhaps the team had already traded him and the media wasn't aware. Later I found out he was in the trainer's room after Friday's practice and they held him out Saturday just for precaution. In his absence, with Michael Oher playing left tackle, Oniel Cousins ran with the first team over at right tackle.

As Lardarius Webb walked onto the field dressed in shorts and his jersey, I observed a noticeable limp as he walked across the field. No such limp from safety Haruki Nakamura, who later told me it isn't worth risking injury at this point but he expects to be a full speed by the time Training Camp starts in late-July.

Interestingly, this practice required all media to observe "regular season rules" therefore no cellphones were permitted to be used, be it for phone calls, text messaging nor tweeting.

Side Note: Watch out for undrafted rookie RB Curtis Steele (Memphis), who look nice and quick and yes, he has dreadlocks!

During offensive drills for much of the full squad practices, the team simulated crowd noise with speakers around the field at a very loud volume. When it first came on, I thought an airplane was overhead or even Godzilla was going to come out of the rustling trees beyond the fields. On the first play after the piped-in noise started, the offense drew a yellow flag for a false start from the official on the scene.

Rookie tight end Dennis Pitta (4th round, BYU) seems to have soft hands and looks real smooth in catching everything thrown his way.

The difference in the comfort levels for even the 2nd and 3rd year players, such as Michael Oher, Ray Rice and Joe Flacco, is amazing. Flacco appears to really enjoy throwing the ball to new receivers Anquan Boldin and Donte Stallworth. 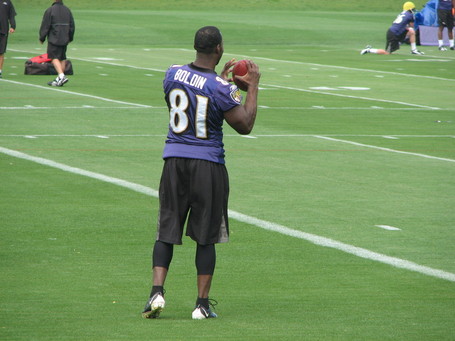 Rookie TE's Ed Dickson and Dennis Pitta are very similar in size, with Dickson just a bit bigger and both fast downfield into their patterns with great hands hauling in passes almost effortlessly. 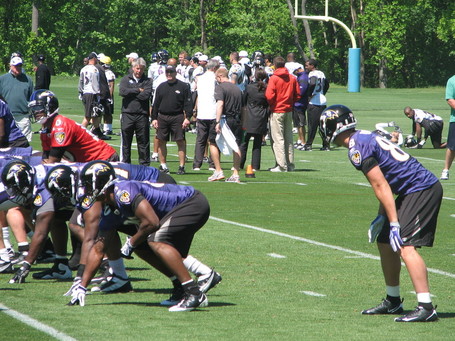 In one of the full squad drills, QB Troy Smith runs out of the pocket down the sideline and is playfully tossed to the ground by safety Tom Zbikowski causing me to wonder would he have done that if the QB was Joe Flacco?

Demetrius Williams catches a nice pass in traffic but on the very next play drops a throw right in his hands while crossing over the middle. Flacco hits Stallworth on a deep pass down the sidelines , who is pushed out of bounds by the late arriving safety, undrafted rookie Courtney Smith.

Reserve QB John Beck, under pressure, tries to dump off the pass to RB Jalen Parmele, but he is covered by...Terrence Cody!? Cody is a mammoth human being who does indeed collapse the pocket, regardless of his so-called inabilities as a pass rusher. However, he commands a double team most of the time, freeing up someone else to get to the passer. 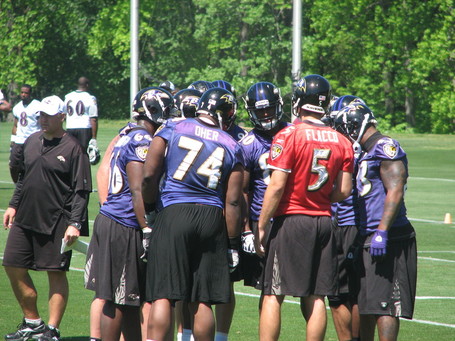 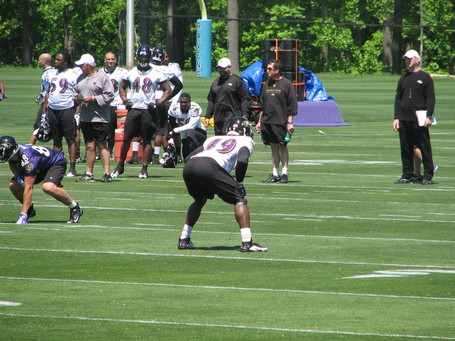 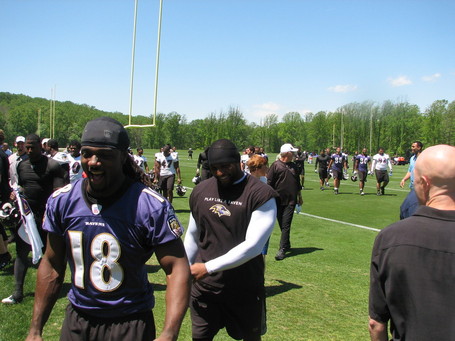