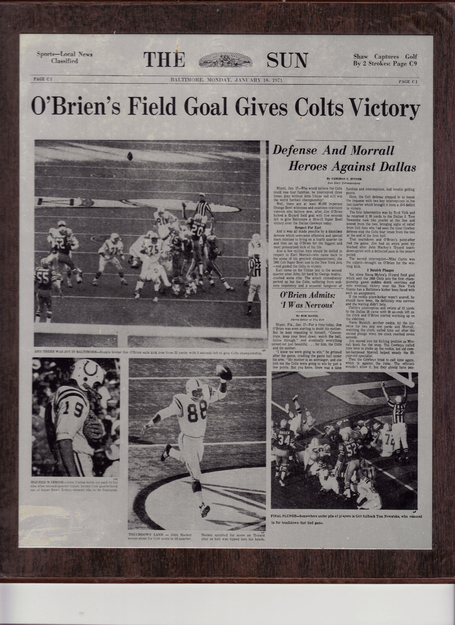 Please welcome a new addition to the "Baltimore History" series, this article is about the Baltimore Colts glory-days and how they struggled to stay on top. I hope this article helps you appreciate the greatness that emanates from the city of Baltimore.

The next season, the Baltimore Colts assured their spot in history by accomplishing the impossible; winning the NFL Championship twice in a row. They went 9-3 and finished the season best in the Western Division again, and earned themselves a spot in the league's championship game for the second time in two years. They faced a rematch with the New York Giants, but this time it would be played in Baltimore's own Memorial Stadium.

In this game two legends were born: Johnny Unitas, and a tradition of excellence in Baltimore football. In the first three quarters, Colt's fans watched in dismay as their team trailed 9-7. However, a young quarterback soon to be known as simply "Johnny U" launched the Baltimore Colts into greatness. He led the team to 24 unanswered points in the 4th quarter to put them up 31-16 and the Baltimore Colts won their 2nd straight NFL Championship.

The next season it looked as if the Baltimore Colts would once again repeat for the third time in a row. The started 6-2 at the top of the Western Division, but lost the next 4 games, paving the way for the Green Bay Packers to win the Western Division.

The next ten years would be plagued by season-ending injuries to key players and disappointing championship losses to teams like the Cleveland Browns, the Los Angeles Rams, and the New York Jets. The latter of the three was the most painful, seeing as "Broadway" Joe Namath guaranteed a victory for the Jets the day before the game, and followed through with a 16-7 win, despite the fact the Baltimore Colts were heavily favored to win Super Bowl III.

Before the 1970 NFL season, the NFL football teams, including the Colts, merged together with the AFL, as part of the NFL-AFL merger. This new league would become what is now the National Football League. This merger gave each conference an equal amount of teams, and divisions. The COlts, along with the Pittsburgh Steelers and Cleveland Browns switched from the NFL's conference to the AFL's side, when both conferences were renamed the NFC and AFC.

In the 1970 season, the Colts won the Eastern Division while by going 11-2-1. In the Divisional Playoffs, the Colts defeated the Cincinnati Bengals 17-0 at Baltimore's own Memorial Stadium. The Colts then defeated the Raiders 27-17 to advance to Super Bowl V in Miami, Florida.

In Super Bowl V the Colts would play the Dallas Cowboys. The Cowboys were leading in the 4th quarter 13-6. Baltimore would tie the game midway through the 4th quarter on a 2-yard running touchdown. With less than 2 minutes left Cowboys Running-back Dan Reeves fumbled the ball, giving it to the Colts in Dallas territory on. Baltimore won the game when Jim O'Brien kicked a 36-yard field goal with 5 seconds left to play. This would be the third championship won by the Colts in their 17 years as the Baltimore Colts. But little did they know the dismay that was about to come over the next 20 years......