Share All sharing options for: Harbaugh Encouraged By Progress of Injured CB's

After the Baltimore Ravens recent OTA Passing Camp, I had the opportunity to join the rest of the media tossing questions at head coach John Harbaugh. When I had my chance to get a word in edge-wise, I asked Harbs about an update on the progress that both Lardarius Webb and Fabian Washington have made in their rehab from their season-ending knee injuries suffered last year. Both guys have been tweeting about their excitement and plans to be ready when Training Camp begins in late-July.

Here is how Coach Harbaugh responded to my question, and to read the full Press Conference Transcript, click on BaltimoreRavens.com.

On CBs Fabian Washington and Lardarius Webb tweeting about their progress: "Well, we had a positive, as you saw on the tweet… We had a positive report from Dr. Andrews, so it looks like those guys are ahead of schedule, you’d have to say, in both cases. But, the thing that you’ve got to keep in mind is that ACLs, knee injuries, those kind of things… It’s still going to be a work in progress. I mean, it usually takes two years. Now, historically, you’d say two years for a guy to be 100 percent back from an ACL. Now, that has changed. Things are speeded up now. Technology is amazing. So, how fast can they compete and be safe? How fast can they line up and really win for us out there? I think we’ll find that out as we go through training camp." 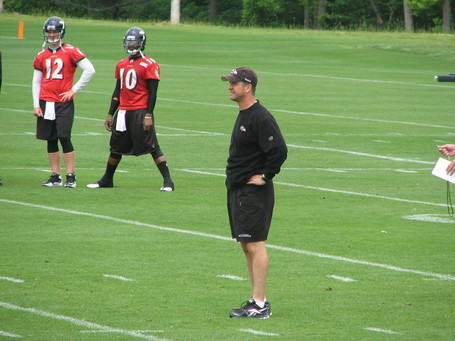 The funniest question from the Post-Practice Press Conference came when Harbaugh was asked about the sack that rookie Terrence Cody had on Troy Smith that I wrote about in my Summary story a few days ago. If you haven't already clicked on the previous link, here is how the Head Coach responded:

On rookie DT Terrence Cody almost pancaking QB Troy Smith and Cody’s progress: "I’m not going to go there. I think there’s a lot of opportunity on that, with the pancake comment, but we’ll stay away from that. (laughter) He’s had the hip, so he’s had a little bit of a hip soreness, so he hasn’t practiced a lot in the last week, So, today was really his first day back. He looked good today. I think the thing I’m most impressed with… He’s really a bright guy. I mean, he really does a good job studying the defense. Really, in the first mini-camp, as much as we threw on him, he came out here and picked it up really quickly. He works hard in the weight room. He works hard in the conditioning stuff, so all plusses so far. Obviously, when the pads come on, I think it’ll even be more of a strength for him, but he’s done well so far."