As Derrick Mason, LeRon McClain and Ray Rice stood laughing and stretching on the sidelines, the rest of the team watched Special Teams drills, specifically punt return coverage, with the coaches yelling instructions, especially to the rookies. Performance on the Suicide Squad will go a long way in determining the last few roster spots on this team. 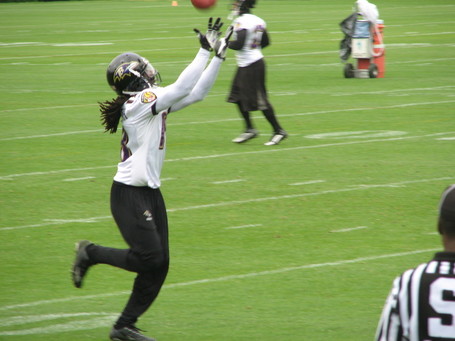 The QB's and WR's are lining up wit a pair on each side, one QB throwing crossing patterns while the other is hooking up on long bombs. All passes are looking accurate and real crisp. In the hurry up offense, Flacco leads the team downfield and hits Ray Rice leaning over the end zone sidelines, who makes a fingertip catch and then dances out of bounds to celebrate to the hoots and hoolers of teammates.

Mark Clayton is dressed and practicing but it is obvious he is not running with the first team, behind the absent Anquan Boldin, as well as Derrick Mason and Donte Stallworth. Both rookie tight ends, Ed Dickson and Dennis Pitta, make acrobatic catches over and over, sending a message to veteran Todd Heap that he will not only have help at the position, but serious competition as well. 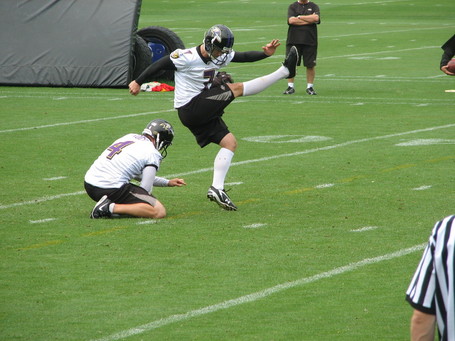 Placekicker Billy Cundiff remains the only kicker in camp and proves he can do it, hitting on five of six, including a 53 yarder, only missing uncharacteristically from 40 yards. On a side note, it's nice to see Ravens Front Office and former Raven OJ Brigance in his motorized wheelchair, making an appearance.

Safety Haruki Nakamura is taking part in drills as he returns from a devastating broken leg in last season's Monday Night Football opening kickoff in the game at the Cleveland Browns. 'Ruki is yapping it up after every play, a good sign. Head coach John Harbaugh later says at the podium that Nakamura is "way ahead of schedule."

In other passing drills, second year inside linebacker Dannell Ellerbe "finds" Flacco for a "sack" aftert the pocket collapsed and Joe tried unsuccessfully to hoof it around end. On the very next play, Flaccco rocket arm is on display as the bullet completed to Mason over the middle thuds into his chest with the sound resonating around the field. 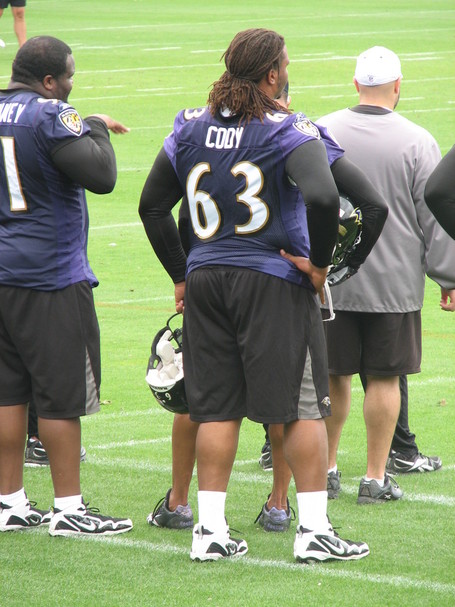 Rookie nose tackle Terrence Cody collapses the pocket by himself, running into and almost over Troy Smith, causing a fumble and recovering it at the same time. Next, he ff a double team to get another "sack" two plays in a row, as you hear "Mount Cody" yelled from the defensive sidelines.

Cundiff once again takes center stage, making one of two, just short yet on target on a 60 yarder. As mst of the team head inside to the locker room, LeRon McClain yells to the assembled media, "How y'all doing? Got t-shirts coming out. Hollywoood McClain," obviously referring to his Twitter campaign to get himself more carries in 2010.

In the final drills QB Coach Jim Zorn splits two defenders on a bullet pass completed to undrafted free agent WR Rodelin Anthony (UNLV). Next Zorn closes out practice with a forty yard pass to TE Ed Dickson for a TD, impressing the media watching in the end zone