The Baltimore Ravens are finishing up their OTA Passing Camp and Tuesday's portion was open to the media, including your's truly representing Baltimore Beatdown. Once again, it was a rainy and cold day, causing me to wonder if any of these mini-camps will ever be held in warm temperatures prior to the official Training Camp beginning in late-July?

However, neither rain, nor cold, nor gloom of day shall dissuade me from my unprecedented access to the team's Practice Facility, so I bore the full brunt of the situation and manned up, all for the benefit of The Beatdown's readers. Here's what I observed in today's spirited practice:

Most of the team was there, including all the rookies and undrafted free agents. Only a handful of veterans were absent, including those either nursing injuries or not required to attend this "unofficial/voluntary" practice. Guys like Ray Lewis, Ed Reed, Haloti Ngata, Terrell Suggs, Kelly Gregg from the defense and Derrick Mason, Jared Gaither and Willis McGahee from the offense were not working out today

Anquan Boldin was warming up alone down the sideline from the drills going on at the other end of the field. Newly signed Ravens, DB Brad Jones and CB Travis Fisher were there. Jones wears #36 and is interestingly the only players listed as a defensive back (DB) rather than a cornerback (CB) like the rest of the players. Perhaps it is because he played both positions at the University of Cincinnati (with current Ravens Haruki Nakamura) and due to his impressive size (6'1", 202 pounds), they are undecided as to where he will play. Fisher is wearing Frank Walker's old number (#41) and with his long, flowing dreadlocks, fits my theory once again of players who rock the dreads all seem to do well in the NFL.

Donte Stallworth glides effortlessly downfield, snagging a crossing pass from QB Joe Flacco. LT Michael Oher and RT Oniel Cousins square off in blocking drills and although this practice is without pads, the slapping of muscle is heard throughout the field. 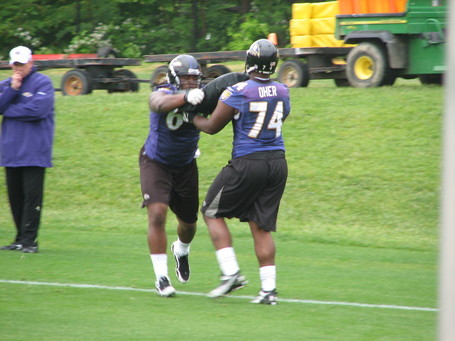 All four tight ends are participating, including the veteran Todd Heap, both draft picks (Ed Dickson and Dennis Pitta) as well as the almost forgotten Davon Drew.

Next comes the "No Video" portion of practice, where everyone is instructed that while still photography is permitted, no video is allowed and all photos must not show any formations or expose and strategies of the sets and plays being ran.

Another Flacco pass floats into the hands of Dennis Pitta, whose hands actually do appear to be "glue-like" as the reputation that preceded him here. 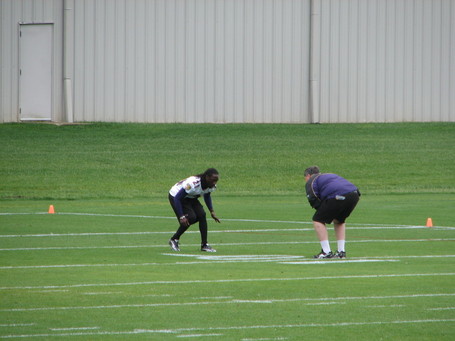 Lardarius Webb is at the opposite end of the field doing individual running drills, switching sides, backpeddling and turning, all with surprisingly good results for a guy who is expected to miss as many as the first six games of the season but personally says he expects to be ready by Training Camp, which would be a wonderful bonus for the team, regardless of this run-on sentence.

Second round draft pick Terrence Cody arrives an hour into practice even though I'd heard he might be missing practice to graduate on stage from Alabama, which would be an impressive feat compared to the majority of players who never receive their college diplomas.

Special Teams part of practice is the field goal drills. Placekicker Billy Cundiff is the lone kicker in camp and lines up two attempts from 50 yards, the first short and the second barely past the crossbar but still good. His final kick is good from 51 yards with room to spare as he finished with five of seven made in this drill. 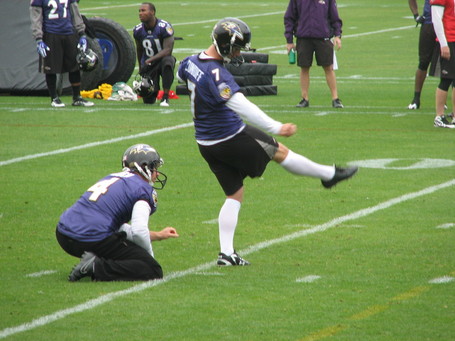 Flacco throws short in the flat to Boldin where "Q" makes a great one-handed catch. Next, Davon Drew gets into the action with a diving catch over the middle. Drew had every opportunity to shine last year when he was drafted to be Heap's backup but reported to camp out of shape with poor knowledge of the playbook, leading the team to take the two guys in this year's draft, Dickson and Pitta.

There's team owner Steve Bisciotti on the sidelines talking on his cell phone and watching practice. No one seems to have the stones to let him know that cell phones are not permitted at practices, but that must be the definition of "Owner's Prerogative." 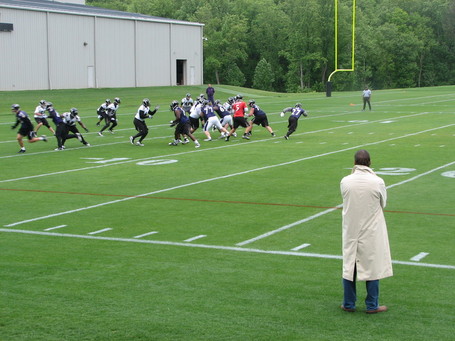 CB Marcus Paschal picks off Flacco in the end zone on a pass intended for Todd Heap. Later, Flacco hits a wide open Heap down the middle for a touchdown on an obvious blown defensive assignment.

The defense jumps offsides due to the QB's cadence, prompting FB LeRon McClain to yap at the defensive sidelines, "get that sh*t together!" 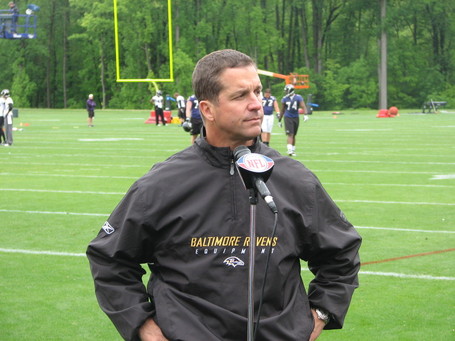 At the end of the post-practice Press Conference, WBAL-TV Sports Director Gerrry Sandusky asks Harbaugh where backup QB Troy Smith was, who responded that Smith was getting his tonsils out due to the problems he's had over the years. As we head into the locker room for interviews, I pass Sandusky and mutter, "If Troy Smith had his tonsils out two years ago, he might still be the starting quarterback of this team!"