Share All sharing options for: Football 101: The Ravens' Hybrid Defense 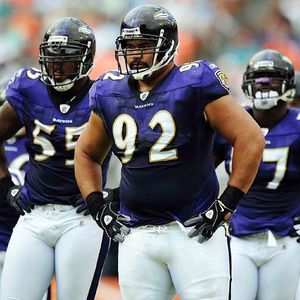 Over the last decade, the Ravens have possessed one of the strongest and most intimidating defenses in the NFL. It has been built around Ray Lewis, one of the best linebackers and defenders in NFL history, but Lewis is only a part of ’s complex defensive system that has become known as "Organized Chaos."

What makes the Ravens' defensive machine work, and why has it been successful for so long? In truth, the Ravens have not been running the same defensive scheme during their entire successful reign, which includes a Super Bowl victory in 2001.  Under Marvin Lewis (1996-2001), the Ravens ran a more conventional 4-3 defense. The 4-3 defense allowed Ray Lewis, in his prime, to roam the field from sideline to sideline and put the burden of success squarely on his shoulders. Now, Lewis didn’t do it alone. The Ravens' defensive line in those days was very impressive too, but the factor that made the Ravens' defense special and dominating was the elite talent of Ray Lewis.

As Lewis aged, he wasn’t able to cover the entire field, and the Ravens' defense needed to evolve. They had the perfect solution… the 3-4 defense. The 3-4 defense took pressure off Lewis, but still allowed him to dominate in run defense. The Ravens have never really used a conventional 3-4 defense. In fact, the Ravens never really switched to a 3-4 defense per se. It was a slow metamorphosis that started with Mike Nolan’s innovations and was ultimately perfected by Rex Ryan. Even today, the Ravens do not run a strict 3-4 defense. The system that they pioneered has become known as a "hybrid" defense because of its ability to shift between 3-4 and 4-3 looks.

In this article, we’re going to get an overview of the Ravens' hybrid defense. The system is so complex that a complete analysis could fill many hundred pages, but an overview should help everyone understand the basic principles behind this highly innovative and effective defensive scheme. We’ll look at the different positions and the preferred player types and hopefully, discover the factors that make the hybrid defense successful.

In general, the front seven players in a 3-4 are going to be bigger and stronger than those in a 4-3 defense. The three down linemen are charged with stopping the run on every down. This is unlike the 4-3 because 4-3 defensive ends typically rush the passer and penetrate the backfield on every down. The 3-4 defensive linemen will need to take on and defeat blocks in the running more often than their 4-3 counterparts. The linebackers also need to be bigger and stronger. Since there is a large space between the nose tackle and the defensive ends, the inside linebackers need to fill the A gaps and take on blockers more than a 4-3 middle linebacker. Like the nose tackle, the outside linebackers are a key position in the 3-4 defense. They are usually called "tweeners" because they are athletes with measurables that fall between a typical linebacker and a defensive end. The 3-4 outside linebacker will also take on more responsibility in run defense and will need to play with outside leverage when pass rushing.

Before we discuss positional functions further, we should take a minute to understand the defensive line techniques. This isn’t entirely necessary in order to understand the basics of a defense, so feel free to skip this section if you want. The term "technique" is a bit misleading because it does NOT refer to techniques that a player uses when playing defensive line. The techniques are part of a numbering system [Figure 2] that designates where defensive linemen are located pre-snap and ultimately determines which gap or gaps a defensive lineman is responsible for. The numbering system shown is not the only one out there. Many teams use their own variation, but the system shown is the most common.

How do you actually use the technique system to determine where defensive linemen are located pre-snap? Here’s an example… If a defensive lineman is playing the five technique, he is lined up on the outside shoulder of the offensive tackle. Playing the five technique, the lineman is closest to the B and C gaps. Therefore, he is expected to defend these gaps. On passing downs, a five technique defensive end is expected to rush the outside shoulder of the offensive tackle. As you can see, the alignment of the technique not only tells you where the lineman is located, but it also infers run defense and pass rushing responsibilities. Here’s another example… A nose tackle in a 3-4 defense typically plays the zero technique. Since he’s lined up directly over the center, he must defend both A gaps in the offensive line. That leads us to the next point.

In a 3-4 defense, the nose tackle is generally considered the most important position and is one of the most physically demanding positions in all football. Since playing nose tackle is such a physically demanding job, good nose tackles are rare. They must be extremely large, strong and athletic. That is a very hard combination to find. The nose tackle is expected to demand a double or triple team on every play. In fact, that is the most important goal of every defensive lineman in the 3-4 defense. The entire defense relies on the defensive line to demand four or, preferably, five offensive linemen on every play. Again, this is the most important factor in the success of the defense and is also why the nose tackle is so important. The nose tackle should demand two blockers on every play and the defensive ends should require three blockers between the two of them. Therefore, the entire offensive line is required to contain three defensive linemen. This is where the 3-4 becomes deadly and its strength apparent. When working correctly, the 3-4 wins with numbers. By requiring five players to block three, the defense has effectively added two players to their defense. In reality, the defense won’t actually be playing with two extra players but theoretically, they should be able to blitz five defenders with two coming free of the offensive line. The defense could also drop an extra defender into coverage with no loss in pressure. We’re talking about theoretical and general situations, but these concepts have been proven on real defenses.

Overall, the 3-4 defense is most effective when the front three defenders can stop the run and tie up blockers. The only problem is that the defensive linemen in a 3-4 aren’t usually good pass rushers since players who can stop the run are typically very big. There are defensive linemen who are capable of dominating the five technique, the technique that most 3-4 defensive ends play, but they are rare because the player needs to be stout against the run and quick enough to rush the passer. An excellent five technique defensive end may be harder to find than an excellent nose tackle. Many teams will put big, run-stuffing defensive tackles at defensive end. This typically works because the primary goal of the defensive line is stopping the run and eating blocks. Therefore, the defensive tackle route is usually effective and cheap. However, if the defense doesn’t have at least one penetrating defensive lineman in the front three, pressuring the quarterback will be much harder and the defense will be forced to bring extra blitzers. That obviously negates the effectiveness of the entire scheme.

The weakness of the 3-4 defense is apparent in its design. The large gaps between the nose tackle and the defensive ends make the defense susceptible to the inside, power running game. With an excellent nose tackle versus an average offensive line, this weakness is negligible. When playing against a power running team with an offensive line that’s on par with the defensive line, the 3-4 defense is at a serious disadvantage, and the lineman will wear out throughout the course of a game. This causes the entire defense to fail since the linebackers will need to commit to run defense, and that opens up the passing game for the offense.

This flaw was an inherent weakness of the 3-4 defense and the reason why most teams ran 4-3 defenses for many years. In the 1970’s, the system was refined by Hank Bullough, the defensive coordinator for at the time. He devised a tactic where the defensive line would shift to the strong side of the formation and the linebackers would shift to the weak side of the formation. This innovative tactic was called the "scissor" [Figure 3]. Originally, the idea was to simply counter the offense on the strong side of the formation where teams usually ran the ball. However, it became the next evolution of the 3-4 defense and the birth of the hybrid defense.

At outside linebacker, the Ravens have even more flexibility with Jarrett Johnson and Terrell Suggs. Terrell Suggs is widely considered the prototypical hybrid outside linebacker, and Johnson is a versatile defender who played defensive end in college. Both players are excellent run defenders and are almost as strong as defensive ends. They are also very good pass rushers with Suggs being the elite edge rusher. These two players allow the Ravens defense to shift to either side of the offense. This ability gives the defense an extreme edge in unpredictability. Since the pass rush can be coming off either edge, the quarterback will find it difficult to make pre-snap reads because he cannot tell which defender is blitzing or which defender is dropping into coverage. That’s the obvious advantage. Another advantage is in run defense. With two athletic outside linebackers who are very effective in run defense, the offense will find it almost impossible to run outside the tackles. This forces the offense to turn all runs to the inside, but since they can never predict when the defense will shift into a 4-3 look, running up the middle is also a gamble.

Obviously, we can’t cover every advantage and angle of the hybrid defense, but hopefully we’ve learned something about 3-4 defenses and hybrid defenses in this first edition of Football 101. I plan to do more of these Football 101 articles, but they certainly won’t be the only articles that I write for Baltimore Beatdown. If there is an aspect of the game that you don’t understand and would like to read an article about, send me an email and I’ll be more than happy to consider it.