The Baltimore Ravens hosted the media Tuesday afternoon for lunch in the Practice Facility's Dining Room, then adjourned to the auditorium for a Q&A with the NFL Draft "Brain-Trust," consisting of GM Ozzie Newsome, Director of Player Personnel Eric DeCosta, Director of College Scouting Joe Hortiz and Head Coach John Harbaugh.

After lunch in the dining room around the likes of players such as Michael Oher, Willis McGahee and Haruki Nakamura, as well as former owner Art Modell, (who looked like he was doing really well), the media had the opportunity to question the four guys noted above about their upcoming draft strategy. 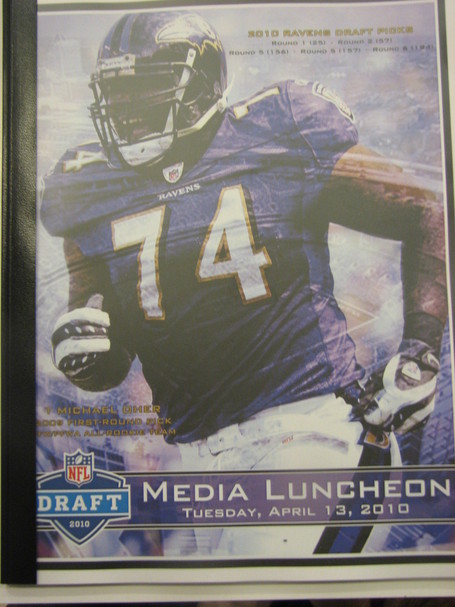 Available to the media was a nicely bound Media Luncheon Draft Guide, chock full of information about the Ravens' previous drafts as well as a bevy of Mock Drafts around the 'net and commentary on teams' needs within the AFC North. Ozzie Newsome starrted off the afternoon with a statement detailing that the team had informed CB Samari Rolle earlier that his contract was being terminated today.

He then went on to say that the team had "picked more in the 20's than in the top 10 since I've been here," and the "draft doesn't unfold until you get past the first 15 picks."

On the prospect of drafting a tight end he said, "there's a tight end in every round that we could take and be glad about it." After trading for wide receiver Anquan Boldinand signing free agent Donte' Stallworth,it appeared that the Ravens were now set at wideout, but then again Ozzie said, "If the best player available when we pick at 25 is a wide receiver, then we'll pick a wide receiver."

I was able to get two questions in during the Q&A session, then approached Eric DeCosta afterwards for one more. Here are some snippets of those questions and I'll post a link to the team's transcript as soon as they post it on BaltimoreRavens.com.

My first question to Ozzie Newsome was:

Beatdown: "With the limited number of draft picks, everybody is talking about the Ravens trading back, but could you foresee a situation that if somebody falls down the board close to you that you would consider actually trading up to pick someone?"

Newsome: "Yeah, we had six picks last year and traded up to get Michael (Oher). There are a lot of ways to build your football team. If we feel like someone starts to come down the board and he can impact our football team, ... then we will move up to get that guy."

I asked Director of College Scouting Joe Hortiz the next question:

Beatdown: "How do you value the balance between the body of work on the field by the player versus the "Workout Warrior" at the Combine?"

Hortiz: "I think the film is the most important thing on the player. The "Workout Warriors" kind of alert you one way or the other,  In the end we've always, in my opinion, liked the guys who've played football well on film. But ultimately, you've got to see a good football player on film, not in shorts and an UnderArmour t-shirt."

After the session was over, I caught up with Director of Player Personnel Eric DeCosta for one final comment:

Beatdown: "With those undrafted free agents, can you talk about what you do the moment the draft ends, because you've had such good luck with them in past years, the frenetic things that go on to try to get them to come to you as opposed to sombody else catching them first?"

DeCosta: "Well I think it's a 'stock market-type' atmosphere, being on the trading floor, guys are yelling and screaming, all the coaches are working tirelessly. We've got phones, scouts are scrambling around recruiting."

(NOTE: Since this question was after the Q&A ended, it won't be part of the team's transcript, so if you want to hear Decosta's complete answer to my question, this is the audiotape recording : Eric DeCosta Question )