Reporting from the Donte' Stallworth "Presser"

Share All sharing options for: Reporting from the Donte' Stallworth "Presser"

Since learning the media slang term for "Press Conference," I need to show off my new word to boast of my access to the Ravens and their Training Facility in Owings Mills. Baltimore Beatdown was represented at the "presser" introducing WR Donte' Stallworth to the media, after trying to keep him from being overwhelmed since his signing with the team around a month ago.

For what it's worth, I think they should have had the media meet him right after the signing, as all the talk and questions about the incident would probably have died down by now. Since it was out in the open today and the main topic he was questioned about, it ends up being regurgitated once more when this could have been over and done with.

Either way, I was there in the back of the pack and calmly waited until most of the questions about the manslaughter case were asked and then I was able to get my question in. Donte' immediately seemed to relax a bit in response to something that was actually football-related.

Thanks to all of the responses to my FanPost about what questions I should ask him, I was not only able to ask one, but got a second question in just before the conference ended. The first was about his speed and the report that he ran the fastest time ever recorded at the Ravens Training Facility. The second was one that was requested by a reader about playing against the Steelers and the fact that Pittsburgh used to have a guy in the '70's named Stallworth who caught a bunch of TD passes back then. 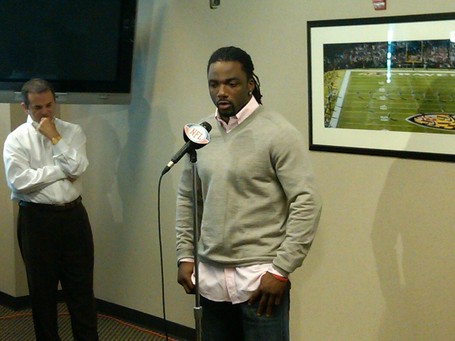 Donte' laughed and answered my questions along with everyone else's, making eye contact and showing the humility and contrition that confirmed the true feelings of remorse that a mature young man has evolved from a guy that perhaps thought he was immortal and above it all, like so many other professional sports stars think, although I won't lower myself and name anyone, even any Pittsburgh Steelers. 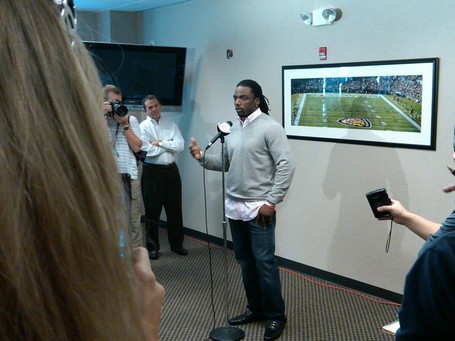 Check out the link here to the Ravens site, which shows Stallworth standing in front of a semi-circle of reporters and cameras, including some good looking guy in a purple shirt standing next to a pretty decent looking lady from Fox45. The same photo is at the top of this story. In addition, here is another link to the Ravens site, with the entire transcript of the presser. My questions were:

On if he is ready to say that he’s the fastest Raven: "No, no. My main thing is hopefully I’ll just be able to prove it on the field. I won’t have to race anyone or any of my teammates. Although, we do have our little inner battles where guys will do a little bit of talking, but that’s all fun with the guys though."

On what he’s looking for in the rivalry with the Steelers: "For those of you that don’t know, I have a Twitter account, and when I signed here in Baltimore, probably at least 70 percent of the things I got [were] from a lot of the fans, a lot of the Ravens fans, expressing their, what’s the word I should use? ‘Dislike.’ We’ll try to keep in PG-13. Definitely, it’s a huge rivalry. It’s two good teams, smash-mouth football. I’m looking forward to that, to playing against Pittsburgh. I played against them down when I was in Cleveland and got to play against them a couple of times in New England as well. They’re a good team, and I’m excited about being able to play football again. But I’m definitely looking forward to that rivalry."

Thanks go out to BaltimoreRavens.com for getting the transcript up so fast for everyone to link to and read.