Share All sharing options for: Anquan Boldin Introduced to Media

Newsome introduced Boldin, saying "he just signed his contract extension upstairs and we had to get him something to eat." Harbaugh said this move had been "in the making for a long time."

(More comments on the Press Conference after the 'Jump' including a short video of a question I asked "Q.")

Boldin then took questions from the assembled media. On leaving the Arizona Cardinals and coming to the Ravens, he said it was "kind of bittersweet," and that he has been "talking over the past year with Ray Lewis and now I'm excited about being here." 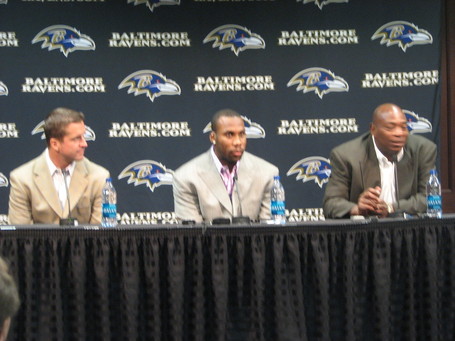 Ozzie was asked if the signing of Boldin meant that the door was shut on re-signing Derrick Mason. His response was "I don't close the door on anyone, especially someone like Derrick Mason."

After the "regular" media got their chances to bark out questions, I was able to rise above the din to ask him about coming from the NFC West to the AFC North and what was his feeling about playing against the Pittsburgh Steelers twice a year from now on? You'll love his response:

Anquan Boldin on playing the Steelers 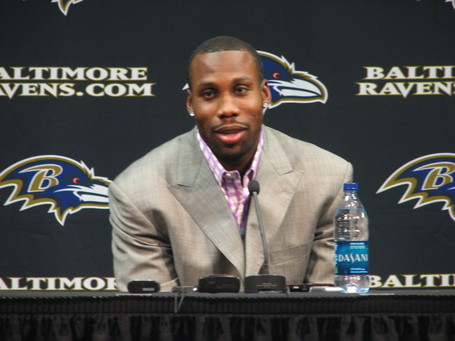 After the "Presser" was over, I asked a member of the Public Relations Department if Boldin was going to officially wear #81 and did he have to do anything with wide receiver Marcus Smith, who had been wearing #81, to get the number? I was told, "Marcus is not here, Boldin will be wearing #81." A member of the media told me that the jersey number is assigned by the team and they can give it to anyone they want and in this case, it's not an issue.

Although it's not up there yet, at some point you can go to BaltimoreRavens.com to see the entire press conference.