Tale of the Tape: Joe Flacco vs. Matt Ryan

Share All sharing options for: Tale of the Tape: Joe Flacco vs. Matt Ryan

Thursday night's football game with the Baltimore Ravens visiting the Atlanta Falcons is more than just a match-up of two solid, first place football teams with identical 6-2 records. It's also a match-up of two former first round picks from the 2008 NFL Draft when the Atlanta Falcons' Matt Ryan was the third overall selection and the Baltimore Ravens' Joe Flacco was the 18th overall pick in the first round.

All around the league and the two cities, people are always comparing the two team's franchise QB's so there is no reason to put these two guy's careers toe-to-toe in order to see the "Tale of the Tape." After two and a half seasons, it looks to be pretty much of a draw as Atlanta fans prefer their "Matty Ice" while Baltimore fans would stick with their "Joe Cool" when asked to choose which QB is further along in their respective careers.

Let's start by looking at the 2010 season. Here are the two QB's statistics through eight games side-by-side:

As you can plainly see, the stats do not differentiate the two players, as they are virtually identical. Ryan has a few more yards, one more TD pass and one less pick, but he has thrown 25 more passes.Therefore 2010 is a wash between them in looking for a clear advantage.

(Click on the 'Jump' for more career stats on Joe Flacco vs. Matt Ryan) 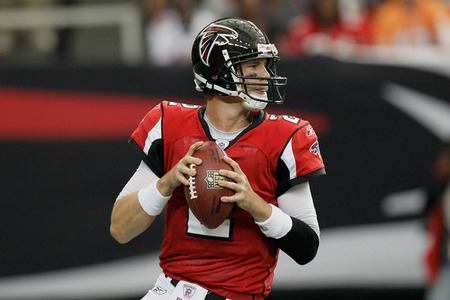 In order to get a better grasp of the two players impact on their respective teams, let's take a look at their full body of work in the NFL since both opened the 2008 season as their team's starting QB's:

Wow, the career stats are once again, virtually identical, although Ryan missed two games in 2009 while Flacco has not missed a game in his career. No clear separation in every statistical category over the course of the two-plus seasons, as both guys seem to be pace for long, solid and respectable NFL careers.

However, there has been one noticeable difference and while it is a huge one, it is difficult to put the reason for it one one QB over the other, as football is a team game and much of a team's success is based on the sum of the parts, not on one individual performance. That stat is playoff appearances and wins, with the Ravens Flacco far outdistancing the Falcons'Ryan in this all-important category. While 'Matty Ice' has only been to one playoff game in his career, a loss to Arizona in his rookie 2008 season, Joe Cool led his team to the AFC Championship Game in 2008, winning two playoff games on the road no less, until falling to the eventual Super Bowl Champion Pittburgh Steelers. In 2009, Joe once again led his team to a win on the road but fell short of a Super Bowl berth when they lost to eventual Super Bowl loser Indianapolis Colts in the Divisional Playoff round.

That's five playoff games for Flacco versus only one for Ryan, a huge discrepancy. However, it is hard to put Flacco ahead of Ryan in terms of comparing quality based on making the playoffs. One thing appears clear in the debate on which 25 year old QB you'd rather have. Fans of the Baltimore Ravens will stand behind their 6'6", 238 pound cool, calm and collected QB, Joe Flacco while fans of the Atlanta Falcons will gladly stick with their 6'4", 220 pound poster boy of their future, Matt Ryan.