Baltimore Ravens wide receiver Anquan Boldin was recently signed as a spokesperson by local Maryland apparel company, Under Armour. The other day, Boldin and some of his teammates were at the company's Swan Creek Warehouse to assemble backpacks filled with Under Armour gear, to be sent to injured troops as part of the Wounded Warrior Project.

Click on the 'Jump' to see some photos and a synopsis of this wonderful effort to make these servicemen and women's lives a bit easier as they have sacrificed so much for this country in what has to be a difficult time that any battle on the gridiron cannot even begin to compare with when they talk about the 'war' on the football field. In addition, see how you can contribute as well to this effort. 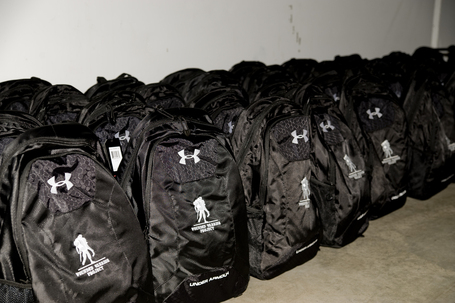 Each backpack contains 1 UA Jacket, 1 UA T-shirt, 1 pair UA shorts, 2 pair UA underwear, 4 pair UA socks and assorted comfort items. The Ravens will also be including some Ravens items as well. Fans can purchase a WWP backpack which is donated to a service member through our website www.underarmour.com/freedomfor the cost of $150.00. Under Armour covers the second half of the cost (the packs are worth a total of $300.00) and the cost of shipping. Fans can also show support by purchasing UA/WWP gear and a portion of the proceeds from the branded gear is donated to Wounded Warrior Project. 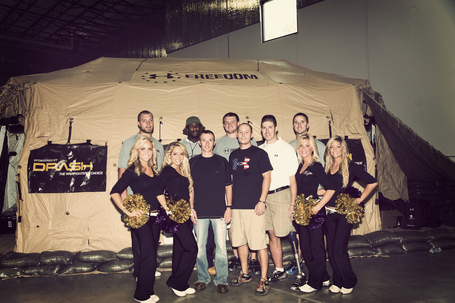