Share All sharing options for: Ravens at Falcons: Open Thread 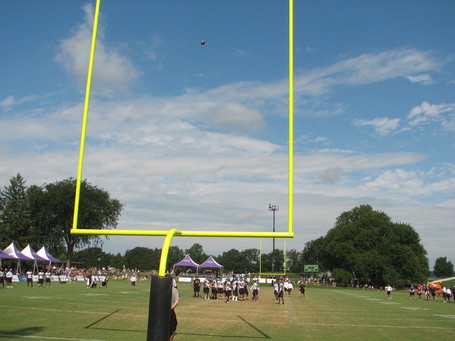 The Baltimore Ravens travel to play the Atlanta Falcons for their third exhibition game in the last ten days and their final game of the pre-season. A week from Sunday their regular season begins as they will host the Kansas City Chiefs at M&T Bank Stadium in downtown Baltimore.

The game might figure to be a little bit boring for the casual fan, as the better known starters should only play a series or two before giving way to the backups and other reserves. The dual purposes of this is to ensure the health of the starters who just want to get a few reps in for the final time before the season starts, and to also give the final opportunities for those players who are still fighting for jobs in anticipation of grabbing those last few precious roster spots on the team,.

The bigger competitions are in the defensive backfield and the linebacker positions. While there are still openings up for grabs on the offensive line, wide receiver and the offensive backfield, the CB and LB groups are stacked with guys who could more than likely catch on and perhaps even start on other teams, but on the Ravens' vaunted defense, spots are at a premium.

Of course, the biggest competition of all may only be on the field for a few seconds here and there. The placekicking competition continues to be a close one, with second year pro, Steven Hauschka having a slim lead over rookie Graham Gano coming into the final test. Hauschka could have wrapped up the job had he not missed a chip shot 27 yarder in last week's Carolina Panthers' game. However, his miss there has kept Gano in the mix, although Hauschka will be given the opportunity to win the job tonight with a good performance. At the same time, if Hauschka misses another easy one while Gano hits a tough one or two, it may come down to a coin flip when the final decision has to be made by Saturday afternoon. I can't believe that the team would even consider bringing back Matt Stover, as that would mean the Ravens would have to carry two kickers on their roster, handcuffing their decision-making by taking a roster spot from another position, one they can hardly afford to do.

Some pundits will say we did it for most of last year, but I still say it hurt the team by cutting necessary depth that could have helped us elsewhere on the field. Stover's accuracy inside of 40 yards might be decent, although it has been far from automatic as others have said, especially over the past couple of years. Either Hauschka or Gano can not only hit the longer kicks, but also can come a lot closer to the goal line on kickoffs than Stover's kicks to the 15 yard line that resulted in opponents starting their drives on the 35 yard line or better on a regular basis.

So stop by here before, during and after he game to post your thoughts on what you're thinking, seeing or finding out as the game progresses. Good luck to those players on the bubble and remember- whether we win or lose is irrelevant, as the Detroit Lions went 4-0 last year in the pre-season and what did they do in the regular season?