How To Beat the San Diego Chargers

Share All sharing options for: How To Beat the San Diego Chargers

Last week we put the same story out on the Kansas City Chiefs and for the most part, the Baltimore Ravens listened to what I posted, but their Special Teams must have taken the day off that it was posted. However, we still "escaped" with a win, according to the never satisfied Ravens supporters, although most of you agree with me that the purple and black (actually they wore white last Sunday) dominated that game on both sides of the ball.

If the Ravens play that way this weekend in San Diego, can they repeat their success? This time, they will be the visiting team and the crown will be firmly behind their Chargers in their home opener of the 2009 NFL season. Both teams come into this game at 1-0, with similar closer victories over opponents originally thought to be much weaker than the games suggested. However, as we've said over and over, this is the NFL and on any given Sunday...

(More on 'How to Beat the San Diego Chargers' after the "Jump.") 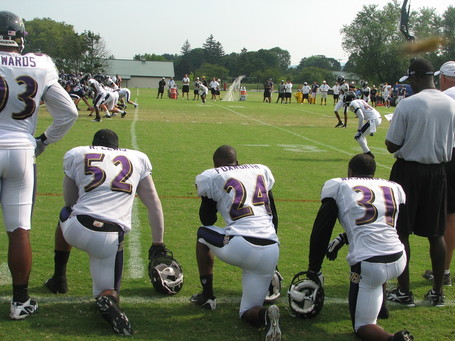 Needless to say, if the Baltimore Ravens wrap up a "gift" or two to the Chargers like they did to the Chiefs, it will put the team in a difficult position against a team with what can be a very high powered offense. Therefore, right off the ball the Ravens must win the turnover battle in order to win the game. One of our posters on The Beatdown listed an interesting stat about how infrequently a team that ends the game -2 in the turnover battle has still won the game and it isn't very promising that we can count on doing that again and still coming out with a victory.

How many Chiefs fans, much less even Ravens fans, thought this offense was capable of that type of offensive explosion that saw the Ravens running up a franchise record of 501 yards of total offense? Now that the cat's out of the bag, how will the Chargers prepare to defend the Ravens? Will they double our wideouts and dare us to run the ball? Doubtful. Will they blitz on every passing play to force Joe to beat them? Perhaps, but still not going to happen every play. The Chargers will just have to put the Ravens in obvious down and distance positions where they are almost certain to either run or pass and hope that Cam Cameron doesn't cross them up. Expect the Ravens to put points on the board against the shaky Chargers defense, as they have been prone to the long pass play and their front seven are injured or just not fully recovered to the point of having one of the league's most feared defenses in past years.

So with the expectations of high scoring by the Ravens, how does the Ravens defense "rebound" (?) from last week? Rebound!? Holding the Chiefs to 188 yards of offense, with 50 coming on one play and another seven on a short TD drive, the Baltimore defense only gave up just over 130 yards the rest of the game to the Chiefs, including a leasely 29 on the ground. No LaDanian Tomlinson is a possibility, but that means more touches for Darren Sproles and probably some carries for Michael Bennett. LT is definitely not the guy he was a few years ago, when he was the obvious #1 pick in most fantasy football drafts for years. Sproles, while swift and elusive in presenting the possibility of scoring every time he touches the ball on offense or Special Teams, is just not the feature back that the Chargers think can last the entire season due to his diminutive size. Even the Ravens Ray Rice, similar in size to Sproles, will not carry the rock 30-40 times like many feature backs and Rice has a couple of guys named Willis McGahee and LeRon McClain to help him maintain his health and limit his wear and tear.

Sproles will get his yards through his various touches, but the Ravens need to be on him before he gets into the open field and can use his jukes and moves to outrun the defense. Not falling for the screen or draw plays, and making sure he is closely followed out of the backfield on passing plays will help this team slow him down enough for the gang tackling that might tire him out before he does the same to us. Regardless of his skills, it's been 36 games and counting since any running back has gone over 100 yards rushing against the Ravens defense and Sproles does not figure to stop that streak.

That means it comes down to QB Philip Rivers and his tsalented group of receivers, namely WR Vincent Jackson and TE Antonio Gates. The Chargers have a couple of other guys who can catch and run the ball, but those two are the focus of the Ravens pass defense gameplan. Jackson presents a tough matchup for our fast, but small DB's and whether it be Domonique Foxworth or Fabian Washington assigned to blanket him, they will need help from the safeties as well as the LB's in front of him. However, those two groups may be matched up against Gates, who is too fast for the LB's and too strong for the safeties. Therefore, expect those two guys to get the balls thrown in their directions early and often.

It will be tough to slow them down if Rivers has the time to find them and throw. Therein lies the key to the game. Whereas I have said that the Ravens will score and Sproles may get some yardage and the Chargers receivers will be hard to shut down, the key to the game is getting pressure on Rivers. The Ravens defensive package will be to stunt and confuse Rivers by limiting the time he has to sit in the pocket waiting for Gates and Jackson to find the seams in the coverage. Harassing him, chasing him out of the pocket and slamming him to the turf in the beginning of the game will set the tone for making him throw the ball just a bit earlier than he wants, before his receivers come out of their breaks and lead to incompletions, tipped balls and ultimately the interceptions that the Ravens led the NFL with last year.

Forcing Rivers into turnovers and even incompletions, will frustrate him, and we have seen him unravel through his emotions getting the best of him. If the Ravens canstart the game with a turnover to set the tone of the rest of the contest, they can outscore the Chargers while limiting their time of possessions as they turn into a run-oriented team with the lead late in the game. If we get the chance to sit on the lead and run the ball down the Chargers questionable defense's collective throats, we will control the clock and wear down San Diego and win the game.

"IF" is a pretty big word in the NFL and the Chargers, as well as their faithful, might have a little disagreement to this assessment. If so, then wait until Sunday morning when our predictions and Open Thread begin to flow!