How to Beat the Kansas City Chiefs

Share All sharing options for: How to Beat the Kansas City Chiefs 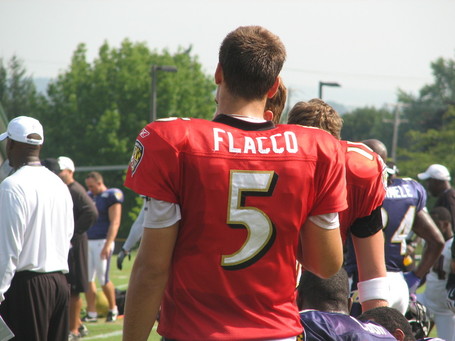 Sigh, ... this is no different for us, them and probably any team in the league. The way to win, other than just scoring more points than the other team, will be to shut down their offense with solid defense, creating turnovers and short fields to work with, then the offense can put the points on the board to win the game. You play to win the game! (Sorry, had to.)

So there it is - NOT! Unfortunately, it just doesn't work that way and teams have to strategize based on the individual opponents' strengths and weaknesses to either neutralize or attack those areas of concern.

The Chiefs present a few of those concerns but to most of the Baltimore Ravens fanbase, the key to victory Sunday will not be on our team's great defense, but on the shoulders of second year QB Joe Flacco instead.

More on "How to Beat the Kansas City Chiefs" after the "Jump."

Without this writer nor The Beatdown's fans sounding overconfident, the experts have listed this game in betting terms as a "walkover," meaning that a 13 point favorite is basically expected to "walk-over" the opponent. What do the setters of the betting lines along with most Ravens fans see to make them think the Chiefs will not put up more of a game than that?

Remember, this is the NFL and these guys are pros and any team can win in this league at any time. Remember how the Miami Dolphins went into New England early last year and trounced the Patriots behind the initial unveiling of the "Wildcat" formation? The Chiefs feel they have a lot to prove to themselves and their fans after the dismal 2-14 season in 2008, marred by injuries in key positions. A new GM, coach and QB could go a long way in turning this once-proud franchise around real quick, not to mention an opening day victory on the road against a heavy favorite.

So how do the Ravens attack this team on both sides of the ball and come away with a win Sunday? Simply put, they need to play the solid, suffocating defense that they are so well known for, create turnovers and keep the Chiefs away from the big play and quick scoring chances. However, that alone will not win the game and with the offense being unleashed for the second year QB out of Delaware, they expect to feature their new and improved passing game.

Offensive Coordinator Cam Cameron played his pre-season strategies in excellent fashion. He knew he had a solid running game, with their three-headed monster led by recently announced starter, Ray Rice, followed by Willis McGahee and in front of them, the huge LeRon McClain now at fullback. Since their success was a known entity, he focused on the passing attack. Now there's no way that he will throw the ball that much more than he ran in pre-season, but the additional passing reps that the entire team, much less Flacco received will benefit their regular season preparedness. 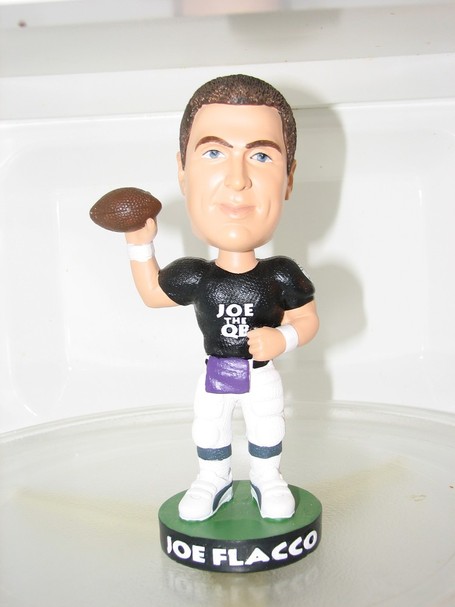 While the Ravens do not have that big name, defense-changing wide receiver, they do have the NFL's 4th leading reception guy over the past two years in the solid Derrick Mason. Whoever else is on the receiving end of Flacco's passes will be happy campers as he is out to prove his Reebok Fantasy Files video was not infused with special effects. If Flacco can continue the progression he's made since being thrust into the starting role late in pre-season a year ago, the team should be able to move the ball on the Chiefs.

Once the Ravens get a lead, expect a heavy dose of the running attack in the second half, but with a change of pace. While the Chiefs will see a lot of the elusive Rice in the first  half or so, as the game becomes a time of possession contest, Baltimore will turn to their big bodies to pound the rock and demoralize the Kansas City defense with the heavy package of the 230 pound McGahee and 250 pound McClain. 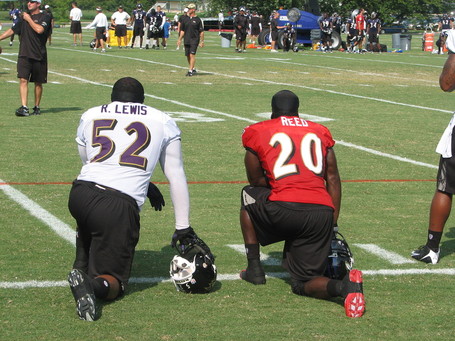 Stopping the opponents running attack will continue to be the rep of the Ravens defense and despite a fitter Larry Johnson, it should continue this trend. The Chiefs' offensive line has had trouble protecting their QB's, so whether it be Matt Cassel, Tyler Thigpen or Brodie Croyle, it won't matter to Ray Lewis, Ed Reed, Haloti Ngata, T-Sizzle and company. Pressure will come early, often and from everywhere and with it will come sacks, fumbles and interceptions. The Ravens led the NFL in picks last year and should continue this trend on Sunday as once the Chiefs fall behind, they will have to air it out which falls right into the Ravens hands and strength.

While this breakdown is relatively elementary in detail, it is classic in its history. The Baltimore Ravens have the third best home record over the past ten years in the league and although the Chiefs are a perfect 3-0 at M&T Bank Stadium, there is a slim chance that they can overcome these obstacles, play a great game while expecting the Ravens to do the opposite. The Ravens also have historically averaged over ten more points a game at home than on the road and no team scored more than 13 points in our house last season. Too many stars must be in alignment for this to happen. If what I am writing and predicting happens, then the betting line might even be safe for the Ravens' fans to bet the house on this Sunday!