Ravens' Secondary: Who Stays, Who Goes?

Share All sharing options for: Ravens' Secondary: Who Stays, Who Goes? 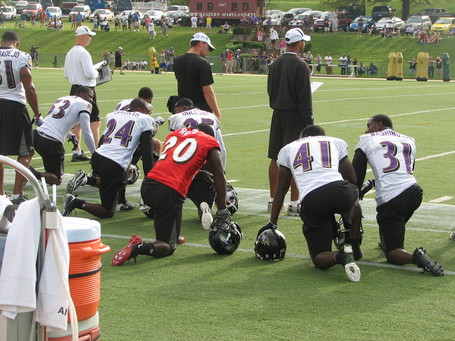 The Baltimore Ravens will have to make a cut or two today to get down to the NFL maximum of 75 players. On Saturday, they will have to declare their 53 man roster by making a bunch of painful decisions. Today, we will be looking at the team's secondary, and predicting what the team will do with their cornerbacks and safeties.

With the recent announcement that veteran cornerback Samari Rolle will begin the season on the Physically Unable to Perform (PUP) List, it makes it a bit easier to look at the list and determine who will stay and who will be let go. Rolle's status on the Pup List is not counted against our roster total, so that actually allows the team to keep another player that might have either been on the bubble or cut had Rolle been ready to go from opening day. 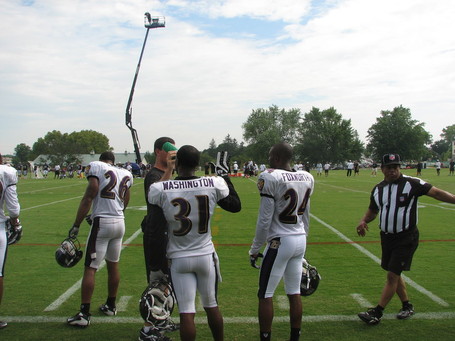 Last year's opening day roster included 10 defensive backs, although there are always a player or two that is placed on the Inactive List for that week's games. Looking at the current Ravens roster of defensive backs, the list includes the following no-brainers who should be starting on September 13th against the Kansas City Chiefs at M&T Bank Stadium:

Adding in those players who figure to be in the nickel, dime and dollar packages, that should ensure the safety of:

While many Ravens fans seem to think that the often penalized Walker should be more on the bubble than safe, the Ravens still like his physical play and he figures to get a lot of playing time, espeically during the time that Samari Rolle is unavaillable.

That puts nine players in the secondary on the team's roster of 53. If they decide to keep at least one more player, then the choice is whittled down to one of three remaining defensive backs:

Of those three, Martin looks to be the choice, as he is more versatile than the others and has been playing mostly at safety this summer. Oglesby has been burned on a regular basis this pre-season and is probably the first of this list to be cut. However, while Gerard intrigued the coaches with his ability to be around the ball in OTA's earlier this spring, he has not made the impact they were hoping for since Training Camp and exhibition games have begun.

We will see the first round of cuts completed by later today, and while the secondary is a major interest to the team, I still doubt the team will make any cuts today in this area, waiting to see how the guys on the bubble perform in Thursday's final exhibition game before making their final decisions by 5 p.m. on Saturday, September 5th.