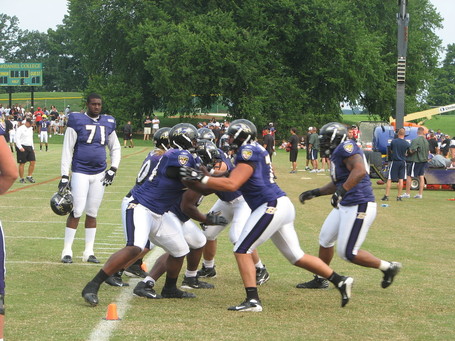 Sorry for the lateness in posting my notes and photos on yesterday's practice session, the only one session this day due to placekicker Graham Gano hitting a 36 yarder that Head Coach John Harbaugh said would eliminate the PM session if he made it. He split the uprights and the players had off until they practice today at 2:30pm (no am session today). However, Gano had his roughest day kicking prior to the all important kick. He missed three of five attempts, either wide or on his two 53 yard attempts, one landing short and the other hit the crossbar and bounced back onto the field.

Saturday was also another "plus-30" day, giving the veterans over the age of 30 off for the day. That didn't stop center Matt Birk, who was out there in shorts walking through drills as he is still picking up the playbook and is such a great mentor to the young offensive line. 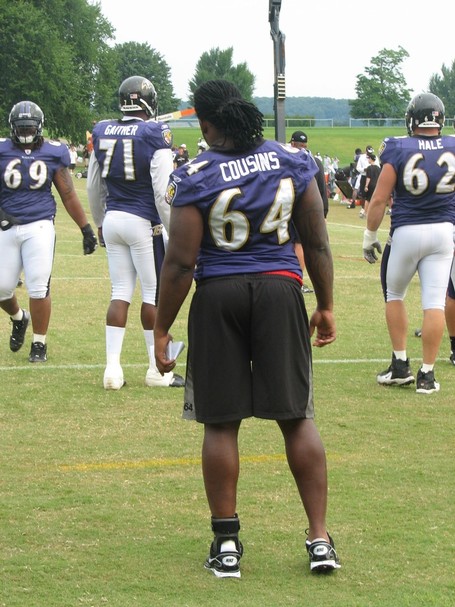 Tackle Oniel Cousins, who limped off the field on Friday, was there in shorts with his ankle in a brace, but not practicing. He said, "it's sore." Guard Ben Grubbs in dressed the same way, but Marshall Yanda is practicing hard. His amazing recovery is truly a welcome sight based on the recent injuries on the line to Terry, Cousins and Grubbs.

In 11-on-11 drills, Flacco is flushed out of the pocket twice in a row, but then completes a sweet 17 yard sideline pass to Marcus Smith. Next he sees his receivers covered and "hoofs" it 30 yards down the sidelines for a TD. However, Flacco then targeted Smith on the opposite sideline but CB Frank Walker read his eyes and picked it off. 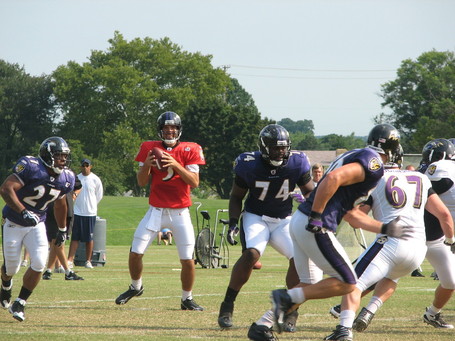 On passing drills with WR's 1-on-1 with DB's, the receivers are either dropping everything or the QB's overthrowing them, while the better passes are being broken up by the DB's, or in Domonique Foxworth's case, intercepting it. Finally Ernie Wheelwright grabs one over the middle but they return to poor form when one clanks off of Todd Heap's hands. Granted these are tough passes that the DB's know are coming and then Foxworth picks off another one, his second of the morning.

Justin Harper had a great day today. He catches two in a row, although the first one was a long toss that was out of bounds despite another one-handed grab. Harper also seems to catch the balls with his arms more than his hands. Meanwhile Ray Rice drops an easy one, earning groans from the fans. But Harper makes the fans happy with a short stop and catch then run for a nice TD. 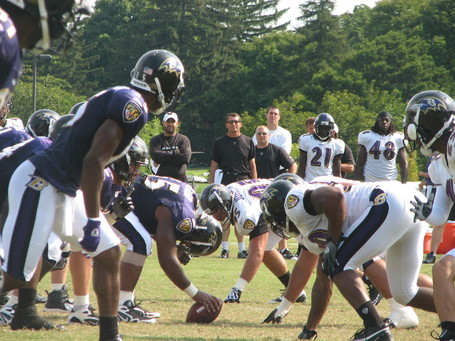 Back to 11-on-11 drils. Flacco zips a rocket to Marcus Smith 20 yards over the middle but Lardarius Webb knocks it away before Smith can secure it. Joe then hits Demetrius Williams over the middle for a nice gain in traffic. Troy Smith gets in the action with a sharp 15 yard sideline pass to Wheelwright who tiptoes out of bounds.

Offense now going no-huddle and when Flacco hits Rice for a nice swing pass out of the backfield. The nice thing about the play was how Marcus Smith drew the DB's away by going long, opening the field for Rice's gain.

The next passing drill has the receivers going against both the LB's and DB's. Flacco's pass is picked by Chris Carr, who laterals to Haruki Nakamura, who weaves his way downfield like Ed Reed does. Webb breaks up two straight passes, both intended for Wheelwright from Troy. Flacco throws a bullet that Smith catches while sliding on his knees.

FIGHT!!!  In the trenches, something happens and a scuffle breaks out. All the players gather around and start pushing and grabbing like a rugby scrum until it settles down and they break it up. Reportedly it was between OL Joe Reitz and rookie Paul Kruger, but according to Coach Harbaugh, it wasn't really anything. 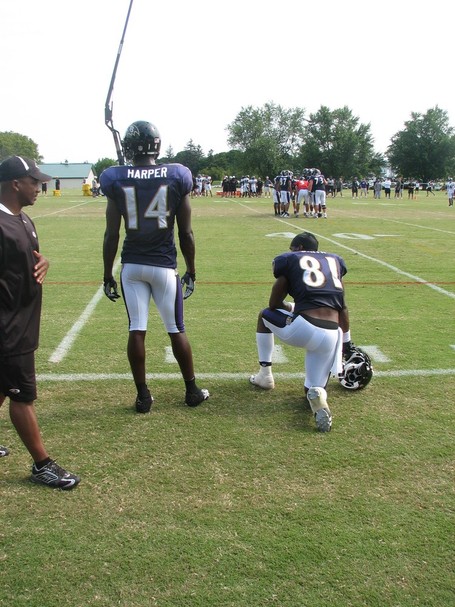 Troy Smith hits a couple of nice ones to L.J. Smith and another one handed grab by Justin Harper! Flacco splits defenders to put one into Marcus Smith in stride. Smith throws a short swing pass to Rice, who fakes rookie LB Jason Phillips into twisitng his ankle on a great move (Phillips is okay). Smith double pumps to Harper, whose move beats both Evan Olglesby and K.J. Gerard for a long, sweet 70 yard TD pass that Justin celebrates with a pretty lame dance in the end zone. If he plans on getting there during the season, he better come up with a different routine!

Flacco hits Kelley Washingotn underneath to beat the blitz for a big gain. Lardarius Webb blitzes again and the play is held up for what would have been an easy sack, if of course, Webb could have brought the much bigger Flacco down.

On one of the final plays, LB's Tony Fein and Prescott Burgess meet RB Cedric Peerman in the backfield, slamming him to the ground.