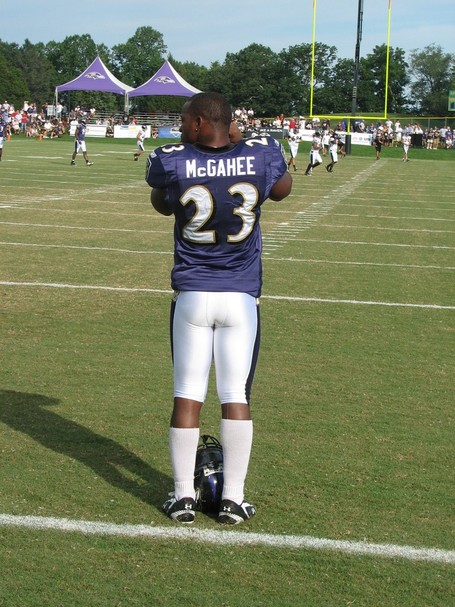 It's good to see previously injured Jared Gaither and Demetrius Williams in uniform, although Gaither is only walking through drills without any contact. In his absence, Michael Oher is playing left tackle. Willis McGahee is in front of me, getting prepared for the morning by taking out his diamond earrings. The wide receivers are running through the "gauntlet," complaining how much the tips hurt their arms 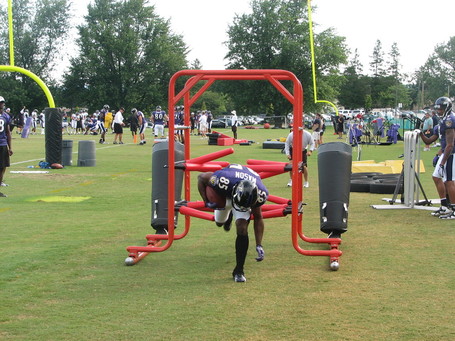 As reported yesterday, Mark Clayton's injury to his hamstring is serious enough to keep him out at least the first two pre season games, but Coach Harbaugh expects him to be ready for the regular season. In his absence, Kelly Washington moves up to be the third receiver along with Derrick Mason and Demetrius Williams.

In 11-on-11 drills, Joe Flacco hits D-Will, who fumbles and the defense recovers. The 1st team offense is going against the 2nd team defense and vice versa. Jalen Parmele is stuffed by Ray Lewis and Antwan Barnes, both of whom get up and dance like it was a real game.

On 3rd and one, LeRon McClain bullies for a first down, then walks off the field saying, "no one's stopping me on third and one!"

The defenses are having their way with the offenses. Flacco scrambles for a gain but is run out of bounds. Next play the pocket collapses for a "sack." On the third play, Flacco's long pass to Mason falls incomplete, prompting Ray to yell, "we'll take it!" Another coverage sack of Flacco ends that stretch of plays as Troy Smith and the 2nd team offense comes in. The defenses, be it the 1st or 2nd teams are looking tough! Troy's first pass is batted down at the line but then he hits Justin Harper down the sideline for a 70 yard TD pass that Harper reels in one-handed beating Tom Zbikowski into the end zone as Troy and the other wideouts run down to congratulate him.

Joe throws incomplete to Kelly Washington, covered by Domonique Foxworth, as Ed Reed covers Mason. After the play, Reed yells, "we know you like a book!"

Field goal team comes on and both Graham Gano and Steven Hauschka hit their attempts from 41, 45 and then 53 yards.

A Flacco pass to Heap glances off his fingertips and into the opportunistic hands of Ed Reed, who then weaves his way down field into the end zone. Gee, sound familiar?

Meanwhile, I notice that Willis McGahee's left knee is getting wrapped on the sidelines, although towards the end of practice I don't see it wrapped anymore.

On the other field I see the offensive and defensive lines going at it one-on-one, with some nice matchups between our 2009 1st and 2nd round draft picks, Michael Oher vs. Paul Kruger.

Back to the main field, the QB's are finding the RB's out of the backfield but virtually nothing downfield to the wideouts against both defenses.

Graham Gano wanders by and says to me, "Hey, how's it going?"

Troy Smith throws three straight times to what is looking to be his favorite target, Justin Harper. He overthrows long, then a perfect pass over the middle hits Harper in the hands before he drops it and finally another incompletion along the sideline. Harper is beginning to get the reputation of a wide receiver who makes the tough grabs but not the routine ones.

Uh oh, OL Oniel Cousins just went down on a running play, holding his knee. He finally gets up but limps real badly over to the sideline where he gets on a cart. With the loss of Adam Terry for the year, Cousins was thought to be a valuable backup so this does not bode well for what is looking to be a thin offensive line.

Long snapper Matt Katula is practicing snaps to punter and kickholder Sam Koch right in front of me. Koch is built like a linebacker! Next to them, I see L.J. Smith standing along the sidelines, showing off his tatooed "guns!" Gano hits twice, from 39 then 35 yards. 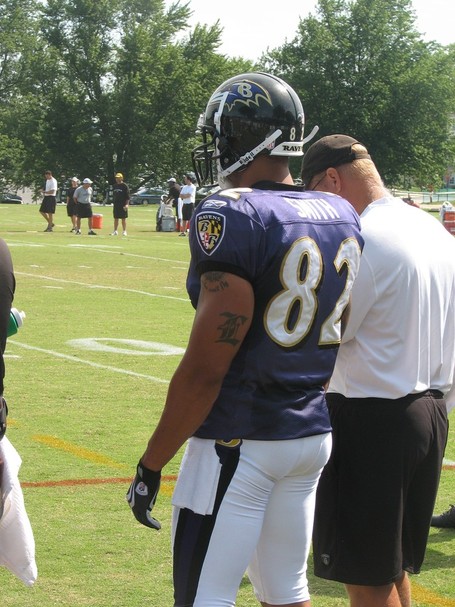 Here's the highlight of my day: A meaningless long incomplete pass to WR Ernie Wheelwright falls incomplete, with Frank Walker holding him all the way down the field. Derrick Mason is standing on the sideline yelling at Frank, "they'll call that every time, practice good habits, Frank!" The jawing between the two continues until the next snap. Harper then catches a tough over the middle pass closely guarded by Walker and then another completion on the sideline near us. Mason turns to me and another guy standing next to me and says, "fellas, how ya' doing?" I reply, "perfect weather out here," to which he respoinds, "not to us." Mason and Walker continue to go at it, verbally. Mason: "I sat out two weeks and I still got it! You couldn't do it. I can play this game for another 20 years abnd you still don't have a spot!" Frank retorts something hard to hear and Derrick comes back with "Don't get me started. I got more money than you can count!" Walker says, "That don't matter," with Mason repeating over and over, "scrape your pennies, Frank, scrape your pennies." Willis McGahee gets in on it, saying, "Frank, Frank." Walker brushes him off, "stay out of it, McGahee!" Walker to Mason: "I've been on three teams!" Mason finally laughs and relents, "Frank, I'm walking away, I'm done." As Derrick walks away, Walker yells after him, "I stuck that 85 today!" That was one of the best exchanges I heard all of camp!  I caught up with Mason as he was walking to the locker room and asked him, "What was upwith Frank Walker back there? He said, "Ah nothing, Frank likes talking every once in a while so you got to oblige him now and then." 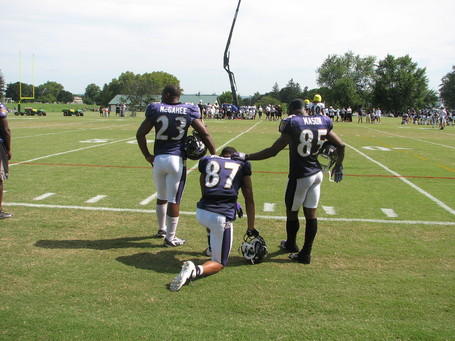 When Mason had his first press conference the day he returned to the Ravens, he said he was a little disappointed the team didn't have a marching band and some Girl Scouts out to greet him. So today a Girl Scout Troop came on the field after practice and they all played little flutes for him, and were mobbed by the press. Afterwards, Derrick signed autographs for every one of them and was real friendly. 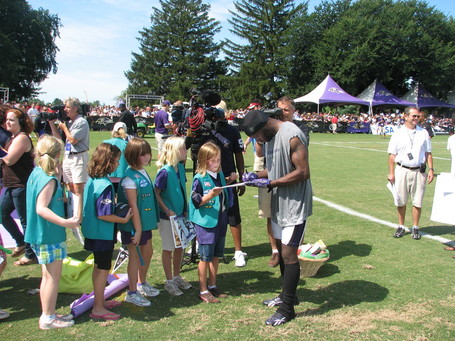 I had planned to interview Oniel Cousins after practice but his injury settled that. Check back later for my interview with WR Kelly Washington, whose role will definitely expand due to the injury to Mark Clayton.