I got a few more one-on-one interviews with Baltimore Ravens players as they came off the field after the Wednesday morning practice session. Here are excerpts from the ones with safety Tom Zbikowski and left tackle Jared Gaither: 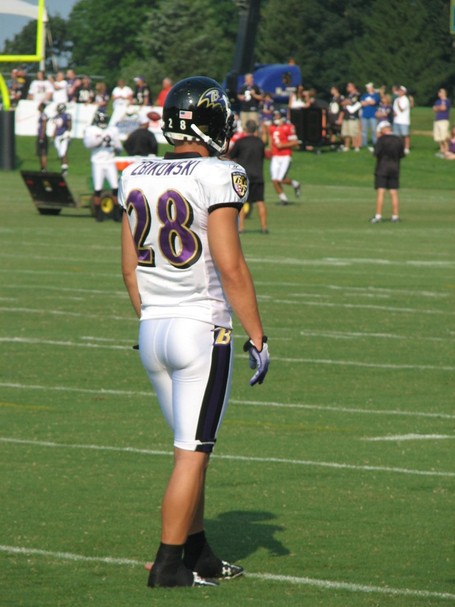 Baltimore Beatdown: I've spoken a bunch of times with Haruki (Nakamura), and whenever I talk about his confidence level and what's it like to be from a first year to a second year player, he always mentions your name. Now I know you guys aren't dating or anything, but I can tell that the relationship really flows, not just off the field but on it as well. Talk about it.

Zbikowski: (laughs) Yeah we built a chemistry all through last year, every time you look over at the other safety for confirmation of a call, it's always each other so it kind of that we came in same time, same situation pretty much. We room together, bounce questions off each other about coverages and we always seem to mess up on the same things. It's been good to have a partner in crime.

BB: Somebody said that we brought two rookie safeties in here and they would be competing with each other and wouldn't really be friends, but you've developed a real friendship as well, haven't you?

TZ: Yeah, it's a competitive sport and most of my friendships came from competitive relationships, from football, from baseball, from boxing. It's almost always a competitive arena and that's where you get your friendships from.  Whatever happens, happens. We've got no control over that. We just come out here and do our best and help each other out.

BB: For the millionth time, what's the difference between coming in here as a wide eyed rookie versus about to start your second year?

TZ: So much more calmed down, you're relaxed, you know you're freaking out about everything when you're coming in as a rookie. I mean you don't know what to expect, you don't know what's going on. Now you've been here once, you've got the routine down and you don't have to worry about that. Now it's just about worrying about X's and O's and coming out and practicing.

BB: Lots of time you hear questions to the quarterback about the game "slowing down" with more experience. Do you feel the same way from the defensive side?

TZ: Yeah, that's with any position. When you come out, it's like you're getting receivers coming from every direction. Your head's on a spin. Now, things are slowing down. You can worry about your footwork a little bit more. Now you're breaking down passes where before you're still backpeddling and trying to read the play. Now you're reading it as it's going on and before it happens.

TZ: I never did judo, so I couldn't tell you.

BB: I'm just trying to see if I can get you to say that your boxing is tougher than 'Ruki's judo.

TZ: In boxing you're just getting punched in the face. I've wrestled before so I know what it feels like to get tossed straight to your back. It doesn't feel good at all. But taking a body shot, I don't know, they both hurt.

BB: That's it. Thanks and good luck.

Click on the Jump to see Jared Gaither's interview. 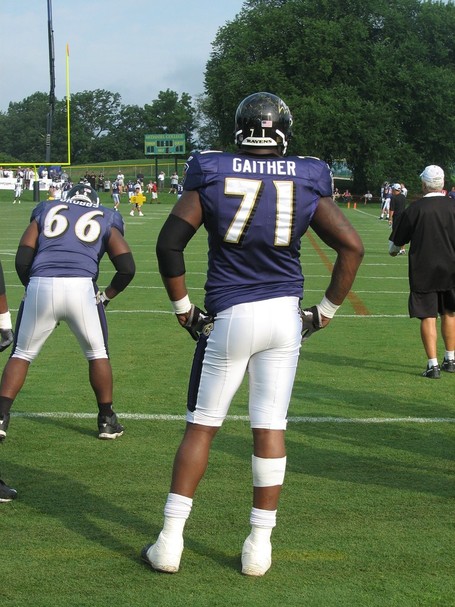 Baltimore Beatdown: Jared, you've been in the league for a few years now. It's been awhile since Jonathan Ogden's retired. You look across to the other side of the line and see a rookie in a similar position that you were. What do you say to him?

Gaither:  Stay focused. He already knows he put in the work to get here and all of us have seen the great player inside of him, so just bring it out and show everybody, every day what a great right tackle he is.

BB: What your confidence level with a full year behind you? You've got a full year with Joe taking snaps. Game slowing down for you?

JG: You know that's what we work towards and every day we work to get better. This is only my third year and that's what you look forward to, you work towards more knowledge, more studying, more film watching. Eventually, it'll slow down.

BB: It looks like your even thinner than you were in the past. Have you just redistributed your weight or is anything different?

JG: Yes, I redistributed it, you can call it that. I've lost a few pounds.

BB: How is it to have someone like Matt Birk come in? Even though he's new to this team, he's been in the league and been on the Pro Bowl team for many years.

JG: Well it's been great. Birk is the coach away from the coach. He helps us out, he fits in real well. I like having Birk around, he's a good guy on and off the field. He's been a tremendous help to us on the offensive line bringing us age and experience at center.

BB: Thanks a lot.